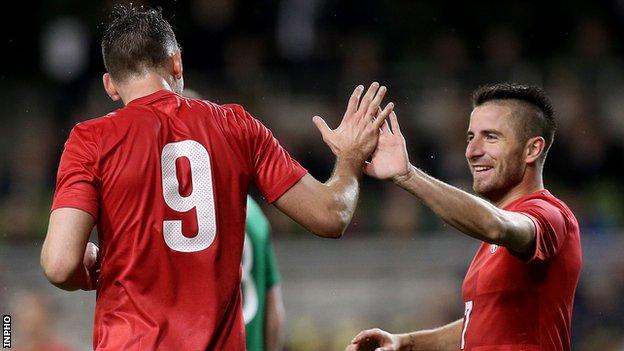 Martin O'Neill suffered his first defeat since taking the Republic of Ireland job as his side failed to build on Shane Long's early goal in Dublin.

Wes Hoolahan had an early effort wrongly ruled out for offside but Long put the Irish ahead on eight minutes after a mistake by Branislav Ivanovic.

Long missed a glorious chance before the break before James McCarthy's own goal saw Serbia levelling on 48.

After Long produced another bad miss, Filip Djordjevic hit the winner on 60.

The Aviva Stadium clash saw the Republic taking on another non-qualifier for the World Cup finals with interim Serbian boss Ljubinko Drulovic taking charge for the first time since Sinisa Mihajlovic's resignation.

As he had hinted on Tuesday, Republic of Ireland boss O'Neill opted for a new central defensive partnership of Richard Keogh and Marc Wilson, with 93-times capped John O'Shea left on the bench.

With skipper for the night Glenn Whelan partnering James McCarthy in central midfield, Long was the lone striker although the creative Hoolahan was playing just behind the Hull striker.

Next Republic of Ireland games

Despite the 38 spots between them in the latest Fifa rankings, the 67th-rated Republic produced a lively start as they attempted to build on the promising start to O'Neill's reign.

Hoolahan appeared to have put the Irish ahead on two minutes as he touched on Whelan's already goal-bound volley into the net from close range after a superb James McClean cross but the Norwich midfielder was wrongly adjudged to be offside.

However, the Republic did go ahead six minutes later as the lively Long chased a seemingly lost cause before pouncing to prod home after Ivanovic's woefully under-hit back-pass.

The Serbs went close as McCarthy reacted brilliantly to nod Ivanovic's bullet header off the line after a Dusan Tadic corner.

But the Republic were continuing to look lively on the break and Hoolahan's charge upfield and perfect pass set up a glorious chance for Long but the Hull striker's shot lacked conviction as Vladimir Stojkovic got down to make the save.

Hoolahan was again centrally involved two minutes later as his clever ball found a charging Seamus Coleman down the right and the Everton full-back's cross was almost turned into his own net by Milan Bisevac.

But after the promise of the first half, the game unravelled for the Republic in the 15 minutes after the break.

Firstly in the 48th minute, Aleksandar Kolarov was allowed to play a one-two with Tadic on the edge of the Irish box and after the Manchester City star attempted to find Djordjevic, the unfortunate McCarthy could only steer the ball into his own net.

Long's night was beginning to turn full circle when he produced another glaring miss with his horrible attempt to loft over Stojkovic after another gorgeous defence-splitting pass from Hoolahan.

Spurred by the escape, the Serbs were ahead within seven minutes as Djordjevic stabbed home from close range after Coleman had been caught in possession just outside his own penalty area.

After the vigour of their first-half display, the Republic continued to lose their way during the remainder of the contest with a plethora of substitutions - notably Hoolahan's withdrawal - not doing anything to redress the balance as Nemanja Matic began to run the game for Serbia.

Only over-elaboration by the visitors, and a couple of fine late saves by Forde, prevented the dominant Serbs from extending their advantage in the closing stages.