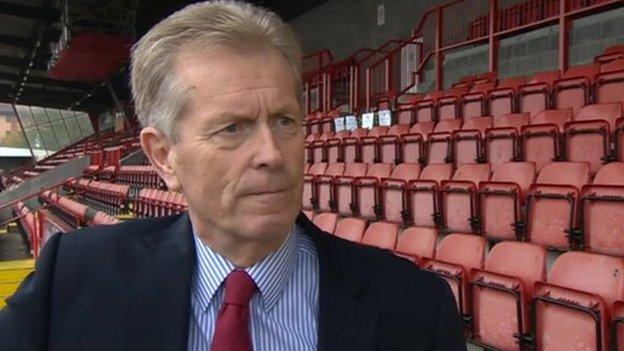 The news that former chairman Carson Yeung has been found guilty of money laundering does not have an immediate impact on the club, following his boardroom resignations last month.

But Dunford, appointed chief executive by Yeung in 2009, remains supportive.

"It must be awful for them. It's not about who owns the share certificates. It's their club.

"Just three years ago they were a Premier League club, then they got relegated, although they did win the League Cup.

"It might have to get more difficult for them before it gets better but they'll come through this.

"Thousands of Blues fans won't know the real reason behind it. The 13,000 or 14,000 regulars, and thank God they still go, must feel so frustrated."

The Blues board, still under the command of acting chairman Peter Pannu, are now bracing themselves for a fresh offer from Midlands-based businessman Gianni Paladini, who told BBC WM on Tuesday evening that he was "still interested" in buying the club.

Despite only spending six months working for Yeung's consortium at St Andrew's, Dunford - now chief executive of League One Crawley - says the experience left him with a fondness for the club.

"When I went there in October 2009 I inherited a fantastic group of staff from Karren Brady, with Alex McLeish as manager and Mike Wiseman too.

"I only met Carson Yeung on match days. He was very personable and treated me well but most of my dealings were done through Peter Pannu.

"But Birmingham City will come through this. They're a very good club with great fans and hopefully there are good times ahead."

Meanwhile, Blues left-back David Murphy has been forced to retire from football with the persistent knee injury that has limited him to just 20 appearances over the past two seasons.

In a 13-year professional career with Middlesbrough, Barnsley, Hibernian and Blues, the 30-year-old scored 23 goals in 290 appearances.