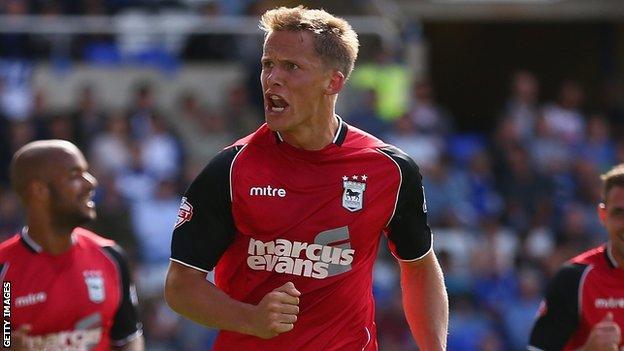 Christophe Berra scored the only goal of the game as Ipswich beat Yeovil to secure their first away win of 2014.

The Scottish defender scored from close range after he slammed home a flick-on from Tommy Smith.

Daryl Murphy almost doubled the visitors' lead but was thwarted by Marek Stech.

And Gary Johnson's side almost secured a point late on when Kieffer Moore hit the post with a powerful drive.

The win left Mick McCarthy's side in ninth place in the Championship table and five points of the play-offs.

Yeovil though remain in the relegation zone, two points from safety despite this being only their first defeat in six matches.

"We didn't get the game going. I don't think many teams around us picked up points so we haven't lost much ground.

"It's all about small margins. We hit the post at the end but it wasn't to be.

"We've said to the lads that we've had a good run but we were poor today and need to be ready for big away games at QPR and Wigan."

"I know we got away with one at the end when they hit the post, but we haven't got away with many and they tend to nestle in the top corner when teams play against us.

"We'll take the three points because they were hard-earned, hard-fought and Yeovil are scrapping for their lives. You saw today that they aren't a bad side.

"We can only win our games, we can't do anything about anyone else's results, and a nice 1-0 away win is great and will make the journey home seem a lot shorter than Middlesbrough, that's for sure."