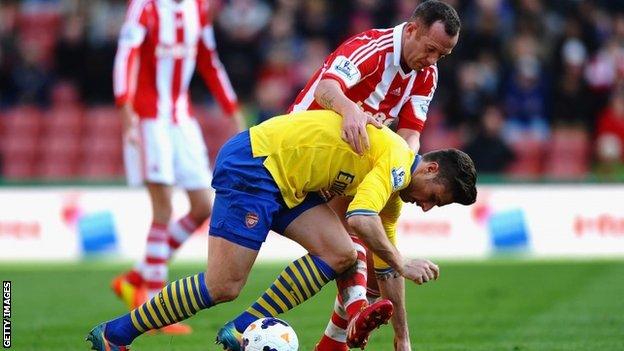 Stoke City's Charlie Adam has been suspended for three matches by the Football Association after a violent conduct charge against him was upheld.

All three matches are in the Premier League

"Adam had denied the charge, but it was found proven at an Independent Regulatory Commission hearing," said the FA on its website.

The midfielder will miss games against Norwich, West Ham and Aston Villa.

Saturday's incident was not seen by match officials but captured on video.

A three-man panel of former referees reviewed the footage and then advised the FA what, if any, action they believed the match referee should have taken had it been witnessed at the time.

Clubs like ours very rarely succeed in appeals to the FA

"I am extremely disappointed for the effect this is going to have on Charlie and on the football club," Stoke City chief executive Tony Scholes told his club's website.

"However, I am not surprised because clubs like ours very rarely succeed in appeals to the FA.

"We put together a strong defence based upon the facts, which were that Charlie needed to plant his foot, and in changing direction his eyes followed the ball at all times.

"How can anybody other than Charlie say what intent was there? How can the FA possibly justify this decision in the light of recent incidents which were far worse at other clubs, which have gone unpunished?"

The win against the Gunners left Stoke in 13th position in the Premier League, six points above the relegation places.