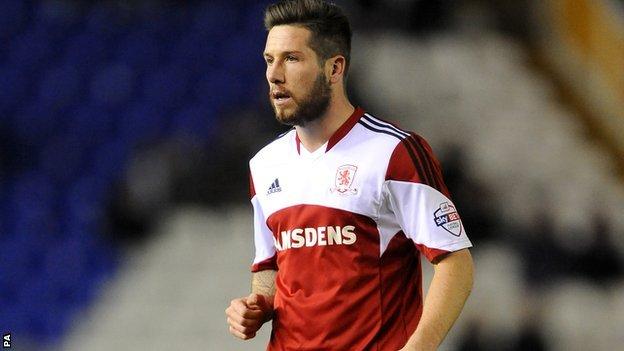 TV replays showed that a shot by the 23-year-old midfielder crossed the line, but the goal was not given by match officials and Boro lost 1-0.

Boro have played 705 minutes of football since Emmanuel Ledesma scored their last goal.

They have now failed to score in seven successive Championship matches.

"Yes, goals change games, but we need to play better than we have been doing in attack," Butterfield told BBC Tees.

"The strikers need help from the team. We have to improve in terms of moving the ball quicker, creating chances and taking them if they come."

Emmanuel Ledesma's on 18 January remains the solitary goal witnessed at the Riverside this year - a victory that put them within five points of the play-off places.

However, the Teessiders have drawn their three home games since then, and collected just one point on the road.

Butterfield's shot, which also struck both posts, would have given Boro the lead against Wednesday.

"I don't want to make excuses, but I guess you could say that goal not being given sums things up recently," he added.

"Confidence is down and you can see that. It's so frustrating because our form over Christmas had given us such a great chance of making the play-offs."