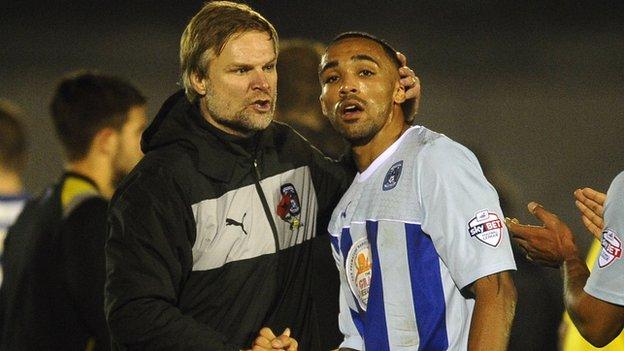 Coventry City boss Steven Pressley says that their decline since the double loss of strikers Leon Clarke and Callum Wilson was somewhat inevitable.

With Wilson now back from injury, he insists they are still a force to be reckoned with, at their most confident.

"When you lose the two strikers that have scored you 30-plus goals in half a season, it's going to affect you," he told BBC Coventry & Warwickshire.

"But we're still a very good team when we play with confidence."

After hitting 50 goals over the first half of the League One season, the Sky Blues had made light of their 10-point pre-season handicap to stand within six points of the play-off zone after winning 3-1 at Rotherham on New Year's Day.

But that was the day they lost 15-goal Wilson for two months with a dislocated shoulder, which ultimately led to him undergoing surgery.

Wilson's loss came on top of reports that his strike partner Clarke had handed in a transfer request.

After an unsettling month of speculation about his future, 18-goal Clarke finally returned to his home-town Wolves at the end of January.

City have now won just once in eight games to slide 14 points adrift of the all-important sixth place, while drifting to only three points clear of the relegation zone.

"Unfortunately, it has affected us in the manner of winning games and affected a little bit of our confidence," he added.

"We've obviously not scored goals at the same rate in the last couple of months.

"But it's about us rebuilding that confidence and getting our belief back.

"Hopefully, Sunday's draw will be the base to go on and start winning games.

"It was the first time in quite a while we've had two recognised strikers on the pitch and, when Nathan Delfouneso returns, hopefully in midweek, we will have three to choose from which will give us greater attacking options."