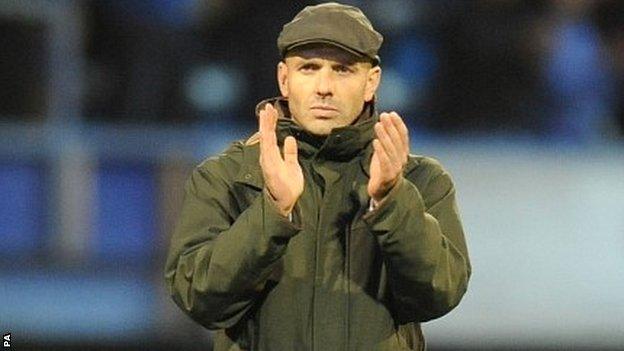 Exeter boss Paul Tisdale says he may bring the club's youngsters into the first team as the Grecians continue to slide down the table.

Tisdale's side are 18th in the League Two table, with Saturday's 2-1 defeat by York City their third in a row.

"We've got a big game on Tuesday in the Under-21 Cup and we've got to look at playing some of those lads in the team," he told BBC Radio Devon.

A fair amount of people have come a long way to see us and I'm proud of them, but I want to give them better

"I've been holding them back a bit but maybe it's time just to play them."

Tisdale said the younger players already in his squad had been the better performers in the defeat by York, with only veteran midfielder Matt Oakley bucking the trend among the players he singled out for praise after the match.

"There were three or four standout players and one of them was Matt Grimes, who came off the bench for the final 25 minutes and was exceptional," Tisdale said.

"Matt Oakley was fantastic, Jordan Moore-Taylor was superb and Liam Sercombe had a combative game and you can't fault his performances over the last few games.

"Tom Nicholls did OK after coming on as well, but they are nearly all younger players and they need help from some of the senior players - and that start just wasn't good enough.

"Players have to do what their position requires and what they say they're going to do but, other than the players I've mentioned who did particularly well, it was a lacklustre start which then required too much effort to recover the game.

"A fair amount of people have come a long way to see us again and I'm proud of them, but I want to give them better.

"That start allowed York City - who took their chances and played well as a team, kept things simple - to win a game.

"Over the course of 95 minutes, there was plenty of good stuff, but the reality is the first 20 to 25 minutes was way from being good enough.

"We didn't get out of our half and when you do that, you run the risk of conceding goals and they won the game in the first 20 minutes."