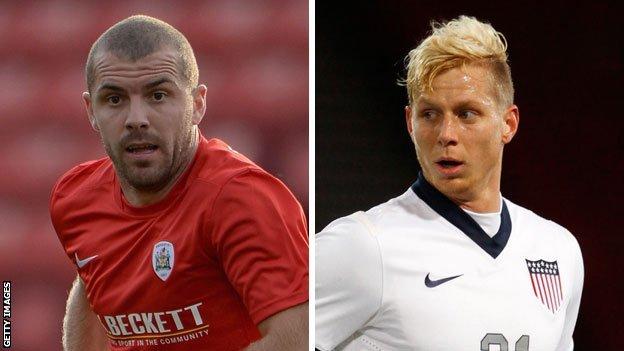 Barnsley have apologised to fans over post-match incidents involving players after the 5-0 defeat by Huddersfield.

Stephen Dawson was involved in verbal exchanges and is to make a "substantial donation" to a local hospice.

The club is still investigating allegations against Brek Shea, who is now away on international duty.

"We do not condone any provocative actions from any of its employees and would like to further apologise for any offence caused," a club statement said.

"Having the backing of our supporters at Barnsley Football Club is of paramount importance, especially as we head into the final months of our current campaign. Supporters are the lifeblood of the club and are the one constant throughout.

"Once again the club would like to apologise unreservedly for any offence caused and assure supporters such actions will not be repeated."

Midfielder Dawson, 28, has made 67 league appearances for Barnsley since joining from Leyton Orient in January 2012.

In a separate statement, he admitted: "My emotions were high and I shouldn't have reacted the way I did.

"I'm really disappointed with what was said to me but I need to be professional enough to take that. The fans have paid an awful lot of money to come and see us and to lose 5-0, I can understand their frustrations and disappointment. "

United States international Shea, 24, who also plays in midfield, joined the Tykes on loan from Stoke in January and has so far made eight appearances for the club.

"In relation to an alleged incident concerning Brek Shea: the matter is currently under investigation and a further statement will be made upon Brek's return from international duty," the club statement added.

The defeat by Huddersfield saw Barnsley fall back to the bottom of the Championship table ahead of next Saturday's home game against promotion hopefuls Nottingham Forest.