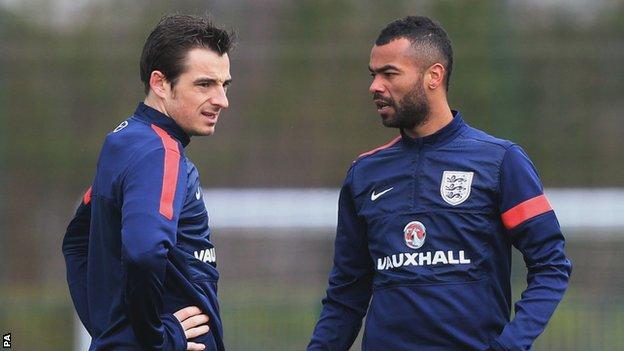 England manager Roy Hodgson will use Wednesday's friendly against Denmark to assess Ashley Cole and Luke Shaw as left-back options for his World Cup squad after deciding to rest Leighton Baines.

"It's the right moment to look at one of, or both, Luke and Ashley," said Hodgson.

"Unless we get an incredible number of injuries, Leighton won't feature."

Cole, 33, has made 106 international appearances but fallen out of favour at Chelsea, while uncapped 18-year-old Shaw has impressed for Southampton this season.

"All three of them want to play, but even with substitutions I can't fit in three left-backs," added Hodgson.

"The two I need to look at in an England shirt are Ashley and Luke."

Tottenham right-back Kyle Walker will not be fit for the game because of a hip injury, meaning Glen Johnson will win his 50th cap.

"Walker hasn't played for the last two or three games and we were hoping he would recover but he needs at least another week before he will be fit to play," said Hodgson.

"If you insist I tell you Glen Johnson will get his 50th cap at right-back, then I can say yes."

Wednesday's game at Wembley is the final chance for Hodgson to see his players in action for the national side before he names his squad for the World Cup in Brazil.