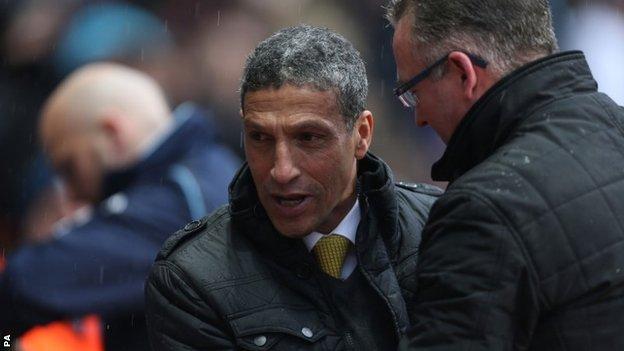 Norwich manager Chris Hughton has said his team must respond to Sunday's "hammer blow" 4-1 defeat by Aston Villa with victory over Stoke next Saturday.

Norwich are four points clear of the relegation zone, but three of the teams below them have played fewer games.

"We've gone into the game in good form but it's a real hammer blow," he said.

"We need to make sure we put ourselves in the best possible position to win next Saturday. A home win changes things again."

The visitors made the perfect start thanks to Wes Hoolahan's well-taken third-minute goal, but after dominating the opening 20 minutes they then crumbled as Villa scored four times in 15 minutes.

Christian Benteke inspired the home team, scoring twice in two minutes, and Villa ruthlessly counter-attacked as Leandro Bacuna scored a third before Sebastien Bassong side-footed into his own net.

"We have to take it on the chin. As a manager I have to accept any criticism that comes my way after a defeat, it's normal," added Hughton.

"We weren't good enough, that's a fact, and we've been well beaten."

Norwich were looking to capitalise on last week's 1-0 victory over Tottenham, but defeat against fellow strugglers Villa leaves them just four points ahead of 18th placed Sunderland.

The League Cup finalists however have played two games fewer than the Canaries, while Crystal Palace - a point below Norwich - have played one game fewer, as have West Brom, who are three points behind Hughton's team.

The Canaries have 10 games remaining and their final four league matches of the season are against Liverpool, Manchester United, Chelsea and Arsenal.

"We are in trouble," said Hughton. "We want to be looking up and there's always a bad feeling straight after a result like we've had.

"But it's probably as competitive as I've seen the bottom half of the division and I imagine it'll continue that way.

"This is the league and you're going to have some bad days.

"At 2-1 we needed to grind it out and get ourselves back in the game but in that really difficult period in the first half the game was over.

"It feels like a major step back because of the manner of the defeat. We've been more solid in recent weeks but were up against a team that are capable of doing that to a team."