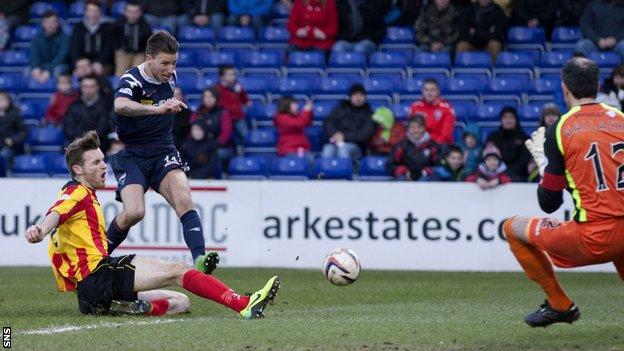 "I thought we had the better chances in the game," Staggies manager Adams told BBC Radio Scotland.

"Paul Gallacher made a number of very good saves for Partick Thistle. We're probably unfortunate not to have won the game on chances created."

With St Mirren winning, both Adams' side and the Jags slipped down the Scottish Premiership table. County now sit 11th.

"It was a better result for Partick Thistle, coming away from home and getting a point," said Adams. "They'll be happier than we are.

"[Melvin] de Leeuw's had two really good chances and we probably should have scored.

"Both sides got a wee bit edgy in the end and when you get near the end, you're going to take a point. We still looked like we could've snatched it at the death but it wasn't to be.

Ross County are now without a game until 15 March, when they travel to take on St Johnstone.

"They're all must-wins for us," added Adams. "We want to win every game.

"We've probably done better against the teams in the top six this season and that's where we're going next. From our point of view, every game's winnable."