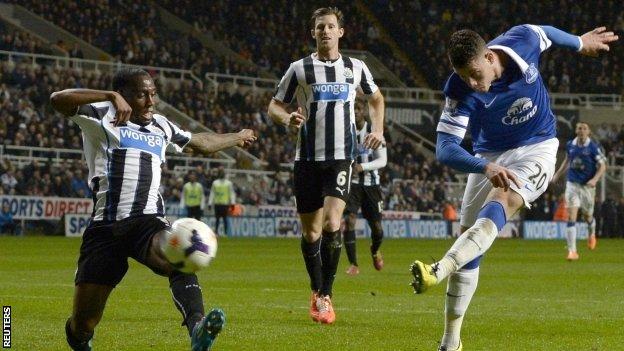 Everton maintained their outside hopes of Champions League qualification with an impressive win at Newcastle.

Ross Barkley set Everton on their way to their biggest away win of the season with a superb first-half solo effort.

Romelu Lukaku finished off from close range just after the break.

And Leon Osman wrapped up the triumph, thumping home Lukaku's lay-off near the end following a run by Gerard Deulofeu, who played a part in all three goals.

Newcastle manager Alan Pardew was completing the final game of his three-match stadium ban after his headbutt on David Meyler.

And his players could only watch as Barkley waltzed through them for the opener.

At just 20, Barkley has been one of the young players of the season and, after racing onto Deulofeu's chested pass, he burst from inside his own half deep into the Newcastle box, before finishing crisply past Tim Krul.

Everton's key games on the run-in

Everton's only other decent chance of note in the opening period fell to Lukaku, but after running onto Osman's through ball, the striker's low shot was turned away by Krul.

Largely though, it was a battling defensive display from the visitors, typified by John Stones, who ended up sporting a large bandage on his forehead after an aerial clash with Luuk de Jong.

A combination of Stones, Seamus Coleman and James McCarthy flew in to deny Papiss Cisse and that endeavour was rewarded in the opening minutes of the second period, when Osman sent Deulofeu away down the right flank.

His cross was perfect for Lukaku, who tucked home his 13th goal of the season from the edge of the six-yard box.

Cheick Tiote had a shot beaten away by Tim Howard as Newcastle tried to rally, before Krul was forced into something similar to deny Lukaku as Everton tried to strike on the counter-attack.

After Vurnon Anita slid wide when arriving with perfect timing at the far post following some excellent work from Hatem Ben Arfa, the belief seemed to ebb out of the hosts.

And Deulofeu combined with Lukaku to set up Osman for the third.

The result means fifth-placed Everton are now six points adrift of Arsenal with a game in hand, and, crucially, still have the Gunners to play at Goodison Park on 6 April.