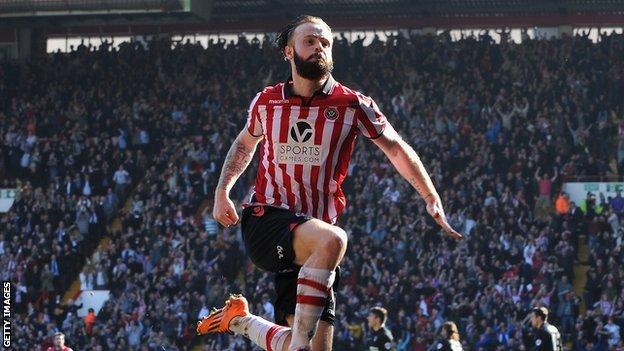 Nigel Clough's side became the first third-tier side to reach the last four since Wycombe Wanderers in 2001.

After Callum Harriott had missed from seven yards for Championship side Charlton, midfielder Flynn stretched to poke in Jose Baxter's bouncing cross.

The victory was United's ninth in a row in all competitions, and means a first FA Cup semi-final since 2003 for the Blades.

Clough's team have become the big story of this season's competition, having already knocked out two Premier League sides - Aston Villa and Fulham - plus Championship side Nottingham Forest on their run to the quarter-finals.

"In the end, Sheffield United deserved it. Very little happened in the first half, but the two quick goals after the break buoyed them. Once the second goal went in, that was game over.

"One of the best things about the day was they way the crowd were. It wasn't a great game, but it was a great atmosphere."

In front of a sell-out crowd at Bramall Lane, there were few chances during a first half in which the tension appeared to get to both sets of players.

Charlton striker Marcus Tudgay's deflected shot, turned aside by home keeper Mark Howard after half an hour, was the first effort on goal of any note.

At the other end, United's on-loan Liverpool midfielder Conor Coady had a goal ruled out for offside, and defender Bob Harris drove a shot just over, having been set up by Harry Maguire.

Centre-back Maguire's shot on the turn hit the side netting early in the second half, before Harriott passed up a great chance to fire Charlton towards their first FA Cup semi-final since they last won the trophy in 1947.

Tudgay cut the ball back from the by-line, but Harriott turned his shot wide on the stretch from seven yards.

The Blades then took advantage of that miss to score twice in quick succession, with Flynn turning in the opening goal from six yards with the sole of his boot after Baxter's cross from the left unstitched the Charlton defence.

Almost straight away, the lead was doubled as full-back Brayford's low shot from outside the penalty area was deflected past keeper Ben Hamer.

Coady thought he had added a third from close range as the ball rebounded to him off a post, but was again ruled offside.

Blades keeper Howard turned away a late shot from Charlton's Iran international substitute Reza Ghoochannejhad late on, but the visitors failed to mount a comeback.

"We were nervous in the first 20 minutes and it was important to get in 0-0 at half-time.

"The atmosphere, it saps you when you're not used to it and a lot of players playing in this sort of thing for the first time, this atmosphere takes your energy and it takes your breath away at times.

"To get to this stage as a League One club in the semi-final is an incredible achievement."

"Obviously there was the opportunity to go to Wembley and credit to Sheffield United.

"We had the chance to break the deadlock. Really that's the game-changer for me because they then went 1-0 up and a deflected second goal and that's two in two minutes.

"That left us with a big mountain to climb and sadly we couldn't get enough flowing to get ourselves back into it."