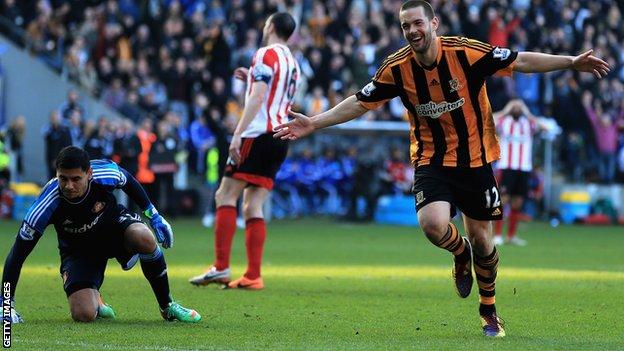 Hull City reached the semi-finals of the FA Cup for the first time since 1930 as three goals in the final 22 minutes ended Sunderland's hopes.

Cattermole was at fault for the third, when his loose pass allowed Matty Fryatt to score from 12 yards.

An 84-year wait for a semi-final

Sone Aluko missed a first-half penalty for Hull, but their late flourish set up a semi-final with Sheffield United.

Meyler's goal was the crucial one, the Republic of Ireland midfielder celebrating by headbutting the corner flag after being on the receiving end of similar treatment from Newcastle boss Alan Pardew last weekend.

And after winning promotion back to the Premier League last season, Meyler and his team-mates are now only two games away from winning their first major trophy.

Sunderland, beaten by Manchester City in the Capital One Cup final last week, will now focus on surviving in the top flight, in which they sit 19th, one point from safety.

Hull were the only side left in the competition never to have won the trophy and, after a scrappy first half, ruthlessly took their chances to beat the Black Cats for the third time this season.

Sunderland will have played 49 matches by the end of the campaign and would have not enjoyed the prospect of a replay, which the match looked destined for after Aluko spurned his spot-kick.

The striker, who has scored just once in 14 appearances this season, was swept off his feet by Sebastian Larsson to earn the penalty but his tame effort allowed Oscar Ustari to dive to his right to save.

Bruce back at Wembley

Fryatt had earlier flashed a glancing header wide of the Argentine's post, while Sunderland - FA Cup winners in 1937 and 1973 - struggled to create a clear opening.

And Gus Poyet's side, with six changes from last week's Wembley defeat, were undone when defender Davies headed home Tom Huddlestone's free-kick for his third goal in as many matches.

Four minutes later Meyler doubled the lead as he led a solo counter-attack, to the delight of former Sunderland manager Steve Bruce.

Hull, who are only five points clear of the Premier League's relegation zone, sealed the win when Cattermole's error presented Fryatt with time and space to slide home.

Victory means Bruce will manage a team in an FA Cup semi-final for the first time, with another of his former clubs providing the opposition on the weekend of April 12-13.

Hull boss Steve Bruce on David Meyler's 'headbutt' celebration: "In the way he has conducted and handled himself this week, David has been a model for me.

"David took it on the chin and accepted the apology. He didn't roll on the floor and he didn't go and bleat in the newspapers.

"I've said all along that it's sad that the FA Cup has lost a bit of the magic for whatever reason, but when you reach this stage it becomes exciting."

Sunderland manager Gus Poyet on Lee Cattermole's error: "If you hide and you're not in the game and do nothing to take a risk, then for sure you're not going to make any mistakes.

"That's the bad side of football - the ones that take responsibility and the ones that care, they are the ones who are in the position to make the mistakes. That's football.

"We didn't create enough but I'm not going to try to find any excuses. The players who played today were not good enough and that is simple."