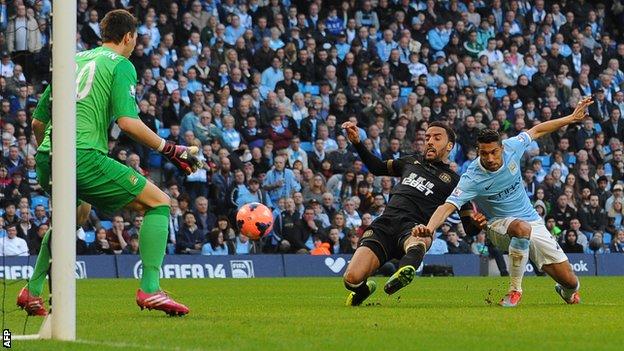 FA Cup holders Wigan will return to Wembley for a semi-final meeting with Arsenal after stunning Manchester City in a repeat of last year's final.

City, who won the Capital One Cup last weekend, paraded that trophy before kick-off but saw their hopes of a domestic treble unravel against their Championship opponents.

Jordi Gomez put the Latics ahead from the penalty spot after a mistake by Martin Demichelis and James Perch made it 2-0 after half-time thanks to another City error.

Manuel Pellegrini's side hit back through Samir Nasri but could not turn intense late pressure into further goals as an outstanding defensive display by Wigan got its reward.

After a draw at St James' Park, Southern League Hereford won the replay after Ronnie Radford equalised with a 40-yard thunderbolt. Then Ricky George hit the winner in extra time.

Dave Beasant became the first goalkeeper to lift the FA Cup after famously saving a penalty from striker John Aldridge in the final and Lawrie Sanchez headed home the deciding goal.

Coventry arrived in Surrey just 18 months after winning the FA Cup, and were left stunned as Tony Rains and Matthew Hanlan became goalscoring heroes for the non-League team.

The Gunners were league champions, Wrexham were bottom of the old fourth division. Mickey Thomas equalised with a free-kick and Steve Watkin got the winner.

A non-League side beat top-flight opposition in the FA Cup for the first time in 24 years as Scott Rendell struck 10 minutes from time for Conference Luton at Carrow Road.

It was another day to remember for the Latics fans, who watched their side lift the trophy at Wembley last year after a shock win over City, and also for their manager Uwe Rosler, too.

A City legend as a player, Rosler ensured his old side endured the sort of day they saw plenty of when he played for them in the 1990s.

Rosler was given a rousing reception from all parts of the Etihad ahead of kick-off, before his team showed why he has a reputation as a young manager to match the one he had as a player in a sky-blue shirt.

In the first-half, Wigan badgered City whenever they ventured forward, with wing-backs Perch and Stephen Crainey pressing forward to deny the home side space in midfield.

The Latics' flexible formation meant they also looked more lively when they attacked, but it took the sort of calamity from Demichelis which City's supporters are becoming wearily accustomed to seeing to give them the lead.

The defender allowed Marc-Antoine Fortune to spin away from him in the left-hand corner and then tripped the French striker as he stole into the area.

It was a clear penalty, which Gomez stepped up to calmly despatch past Costel Pantilimon.

Falling behind did not bring any sort of response from Pellegrini's men, who mustered just one shot at goal before half-time.

Things quickly got worse for them after the break when more atrocious defending allowed Wigan to double their lead.

This time it was Gael Clichy at fault, hesitating as James McArthur's cross trundled across the face of goal and allowing Perch to beat him to the ball and turn it home.

Pellegrini had seen enough, making a triple substitution after 53 minutes that saw David Silva, Edin Dzeko and James Millner summoned from the bench and given a rescue mission.

Before this quarter-final victory Wigan had failed to even score in their last seven visits to the Etihad Stadium in all competitions.

Initially, Wigan held out, but the home pressure was building. Dzeko headed a Clichy cross against a post then Aguero forced Carson into his first real save of the game with a scuffed shot after 65 minutes.

But the visitors' backline was finally breached moments later. Emmerson Boyce headed clear but only as far as Nasri, who fizzed a first-time shot through a crowd and into low into the net.

Suddenly the City fans, who have seen a few famous fightbacks here in recent seasons, believed their side could do it again. Wigan had other ideas.

Carson denied Aguero twice and Boyce cleared from underneath his own crossbar with Dzeko waiting to tap home.

Five minutes of added time gave City more hope but it was Wigan who came closest to another goal when Pantilimon denied Fortune, and a famous victory was theirs.