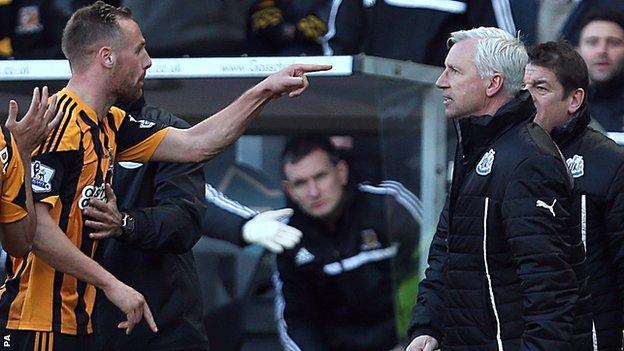 Pardew, 52, has been fined £100,000 and given a formal warning by his club after the incident during their 4-1 win at the KC Stadium on Saturday.

The Football Association said it will investigate Pardew's actions.

"He shouldn't be allowed in the ground for the last 10 games of the season," Savage told BBC Radio 5 live.

Speaking later on the BBC's Match of the Day, after Pardew's fine had been announced by Newcastle, he added: "I thought his position was untenable before the statement."

Pardew was given a two-game ban for pushing an assistant referee in 2012, the same year in which he signed an eight-year contract at St James' Park.

Victory over Hull kept Newcastle in eighth place in the Premier League, two points behind seventh-placed Manchester United, who have a game in hand.

Savage, who played in the Premier League for Leicester, Birmingham, Blackburn and Derby, said: "How can you manage a group of players when you have done that to one of their fellow professionals?"

"There was outrage and understandably so. There was not a lot of provocation, Newcastle were 3-1 up and absolutely cruising."

Savage compared it to the case of then Blackpool manager Paul Ince, who in October was suspended after admitting three charges relating to his actions in the tunnel after a win at Bournemouth.

I signed Alan from non-league and with all respect to him, it was a bit of a non-league reaction.

He said: "Paul Ince was given a five-match stadium ban for his behaviour and Pardew should get a 10-game ban for the rest of the season although, with Newcastle out of all cup competitions and probably safe in the league, is that really even punishment?"

"First and foremost, it was just wrong. He was the first to admit that," Coppell told BBC Radio 5 live's Sportsweek programme.

"He has got previous, and I think his own conclusion that he is now going to sit down away from it is a sensible conclusion.

"He will regret it. I signed Alan from non-league and, with all respect to him, it was a bit of a non-league reaction.

"He would expect more from himself because he is a top Premier League manager now.

"I hope he will learn from it because he's got a long career ahead of him."