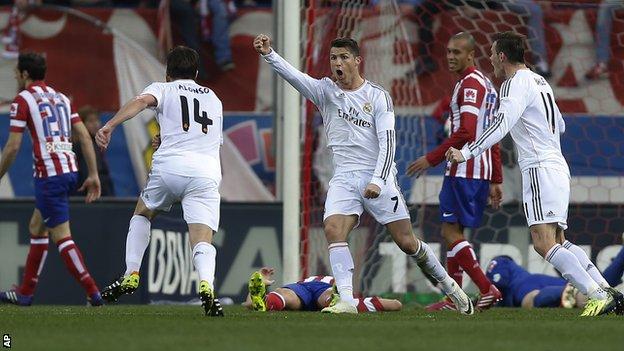 Cristiano Ronaldo struck a late equaliser as title rivals Real Madrid and Atletico shared a draw in a fiercely contested derby at the Vicente Calderon Stadium.

Karim Benzema stabbed in early on to give Real the lead but Koke equalised with a low finish.

Atletico captain Gabi then put the home side ahead just before the break with a stunning long-range strike.

However, Ronaldo swept in late on to ensure Real took a point.

Carlo Ancelotti's side remain top of the standings but move on to 64 points, one ahead of Barcelona, who defeated Almeria 4-1 on Sunday.

The stage was set for a thrilling encounter between these two city rivals as Atletico, three points off the top at the start of the day, went into the game yet to taste defeat on home soil in the league this season while Real were unbeaten in their previous 27 games.

Atletico's fine home record was immediately put under threat when Real stunned the vociferous home crowd with the opener after three minutes.

Angel Di Maria curled a cross towards the far post where Benzema had peeled away from Atletico defenders and poked out a foot to stab the ball beyond goalkeeper Thibaut Courtois.

It was a real blow for the home side, but to their credit they looked to respond immediately and Diego Costa was unlucky not to be awarded a penalty when the striker appeared to be brought down by Sergio Ramos, but the referee waved away the protests.

Real rack up the goals

Benzema stung the hands of Courtois with a volley, before Ronaldo's inventive back-heel was scooped away by the Atletico keeper as Real looked to capitalise on the home side's misfortune.

Just as it looked as though Real would stamp their authority on the game, Atletico snatched an equaliser as Arda Turan slipped a smart ball through the defence for Koke and the Spain midfielder shot across visiting keeper Diego Lopez and into the far corner.

That goal swiftly changed the complexion of the game as the home side started to take control. Gareth Bale had yet to assert himself in the fixture while, one early chance aside, Ronaldo had also been surprisingly quiet.

It looked as though the two sides would head into the break level but a stunning strike by Gabi on the stroke of half time put Atletico ahead. The midfielder rifled a 30-yard effort beyond Lopez's dive and into the back of the net.

After a frenetic first half, clear cut chances were harder to come by in the second, although the match continued to be fiercely contested and a booking for Costa after he fell under a challenge just outside the area prompted a furious touchline reaction from Atletico assistant coach German Burgos.

Atletico could have sealed the win but for a fine save from Lopez who reacted quickly to tip Turan's header over at the near post.

It was to prove a pivotal intervention by Lopez as, with just eight minutes left, Daniel Carvajal's low cross evaded Atletico defenders and Ronaldo swept in to secure a point for Real.