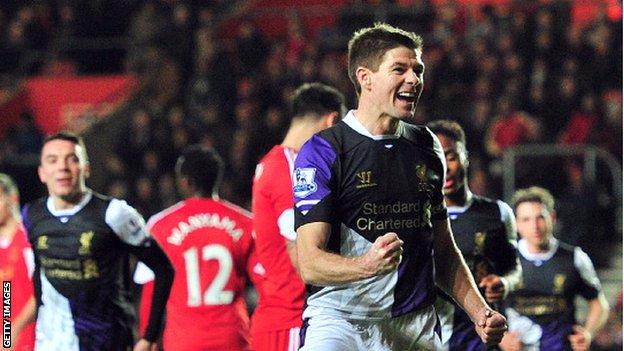 Liverpool's clinical victory over Southampton "sends out a message" to their rivals in the title race, according to captain Steven Gerrard.

The Reds moved up to second in the Premier League table, four points behind leaders Chelsea, with a 3-0 win at St Mary's Stadium.

"As captain, it's my job to help keep the team calm," said Gerrard.

"But we've certainly got a chance of competing [for the title]. You've got to believe and have confidence."

Brendan Rodgers' side now have a two-week break before returning to action at Manchester United on 16 March.

Liverpool, who have won seven of their past nine league games, still have home games against fourth-placed Manchester City and Chelsea on 13 April and 27 April respectively.

"It's a really big win and it sends out a message," added Gerrard, who will lead England in a friendly against Denmark at Wembley on Wednesday.

"The only thing that goes against us a little bit is our lack of experience [in the title race]. But if we keep performing like we have then we've got a chance. "

While Liverpool fans sang "We're going to win the league" during the game at Southampton, Rodgers was keen to play down such talk.

"We're in a good position with 10 games to go. There's still a lot of work to do with regard to where I want to take this team."