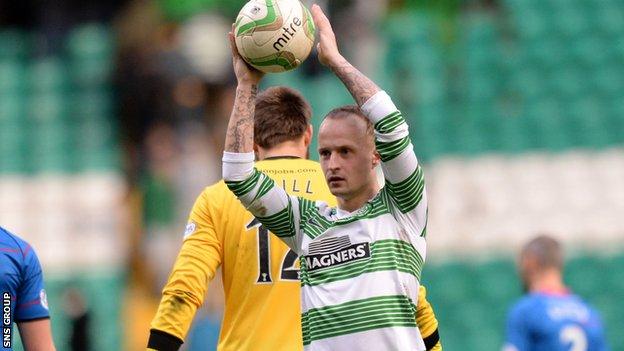 Griffiths stabbed Celtic ahead and added two goals in the second half, with Charlie Mulgrew and Kris Commons also on target for the league leaders.

"We always felt this kid has goals in him," enthused Lennon. "There's a maturity about him now.

"We are a team that creates a lot of chances and we're hoping he'll thrive on that."

Griffiths, 23, was a January deadline day signing from Wolves and opened his Celtic account with a goal in the 2-0 win at Hearts last weekend.

"I was really impressed with him last season [on loan at Hibs] and he started this campaign at Wolves very well before he fell out of favour with the management," added Lennon on BBC Radio Scotland.

"The first goal is my favourite because we've been crying out for a penalty box player for a while."

It was a first-ever league hat-trick for Griffiths and the striker also thought the opening goal was the pick of his three, having volleyed in an Emilio Izaguirre cross from close range.

The other strikes were powerful shots more closely associated with the player.

"The manager sees potential in me and hopefully I can keep putting in performances like that week in, week out," he said.

Celtic lost their unbeaten league record at Aberdeen on Tuesday and Lennon was delighted with the response from his side, who lead the Premiership by 21 points.

"I think we played very well on Tuesday and we've been playing well for quite a while now," he continued.

"There was a great reaction from losing and that was what we were looking for.

"We want to win it [the league titl]) as quickly as we can, with a bit of style and then start building for next year and maybe integrate some of the younger ones into the squad.

"But we're not taking our foot off the pedal just yet.

"There was a flow to us today. Everyone made a good contribution. The pace of our football was a joy to watch.

"We missed some easy chances to add more gloss to the score but I can't ask for any more."