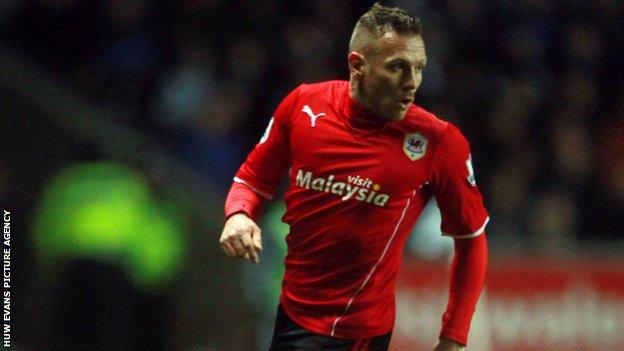 Craig Bellamy believes keeping Cardiff in the Premier League would provide the perfect swansong to his career.

The 34-year-old is available for Sunday's Premier League game at Tottenham after serving a three-match suspension.

His current deal expires at the end of the season and he is as yet undecided about his future.

"What a nice way to end - if it is the finish - by keeping this club up in the Premier League," he said.

Bellamy was suspended for three matches after he accepted a ban for striking Swansea midfielder Jonathan de Guzman in the south Wales derby.

Cardiff are three points from safety in 19th place but the former Wales captain is relishing the challenge ahead of his side.

"This is quite a good challenge. If I'm really honest, it really is," Bellamy added.

"It's very easy to play well when you're winning games, morale is high and everything looks good.

In a lot of games we've been competitive this season, but that was one in which we weren't, so that left us really disappointed

"But when you're up against it then you see who your good players are, who can really play, and when the pressure is on, who wants the ball and wants to do something with it.

"When things aren't going well you find out who the real people are in the club, and that for me is the challenge.

"So what a great achievement it would be to get out of this, and I'm really motivated.

"That would be a fitting end, a great achievement like last year (when the club won promotion) that I've left the club in a real healthy state."

Bellamy feels the result against Hull has galvanised the players during the past week and has made them realise what is at stake ahead of Sunday's tough trip to Tottenham.

"The reaction has been positive, as you would want it to be," Bellamy said.

"It was obviously a difficult result, but we got what we deserved. Hull were worthy winners.

"In a lot of games we've been competitive this season, but that was one in which we weren't, so that left us really disappointed.

"But the best thing about football is there's always another opportunity the next week.

"We just have to go there (to Tottenham) with high energy and in a positive frame of mind, which is what we were lacking against Hull."