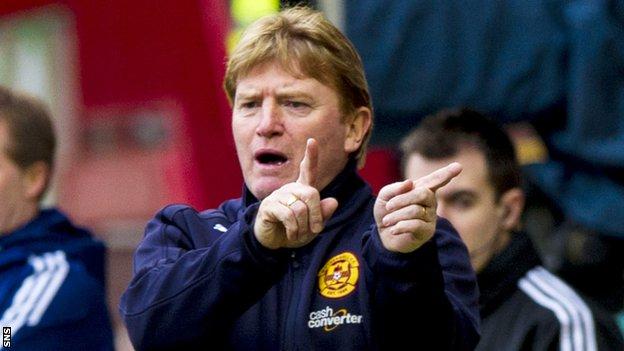 Stuart McCall got the response he wanted from his Motherwell side as they despatched Hearts 4-1 at Fir Park.

"We asked today for the quality players that we've got in the team to come to the fore," he revealed.

"The front four Vigurs, McFadden, Sutton and Ainsworth got the goals for us, so we're really pleased with that."

The Steelmen had lost ground on Aberdeen in second place after away defeats to Dundee United and St Johnstone.

Former Scotland striker McFadden scored one and created three as Gary Locke's struggling side were convincingly defeated, the third time the home side have scored four goals in their last four games in Lanarkshire.

McCall said: "It was important to bounce back today after the two disappointing away performances, but we've been good at home of late.

"We scored four against St Johnstone, four against Partick Thistle, two against Aberdeen and four today, so the home form has been good.

"But, on a difficult heavy park today, I thought we played some really good stuff."

The hosts were without six first team regulars, and Zaine Francis-Angol hobbled off in the first half to increase the injury list, leaving the frustrated manager to rely on youth players.

"I thought [Jack] Leitch for his debut was terrific, and then obviously Zaine goes off early on, so that's five defenders we've got out at the moment. Euan Murray came in and did a sterling job as well.

"But that's the only blip on today's proceedings, that it's another couple of injuries we've picked up."

He added: "A couple of them have been playing well in the under 20s. Obviously if we hadn't had so many injuries they probably wouldn't be as near to playing as they are at the moment.

"[Keith] Lasley's been playing through it. I was actually thinking of leaving him out today, but he's that type of character that he just wants to play, so I'm pleased for the captain.

"I'm pleased for everyone because the last two games have been quite sore and we needed to bounce back quite quickly, and we've done that."