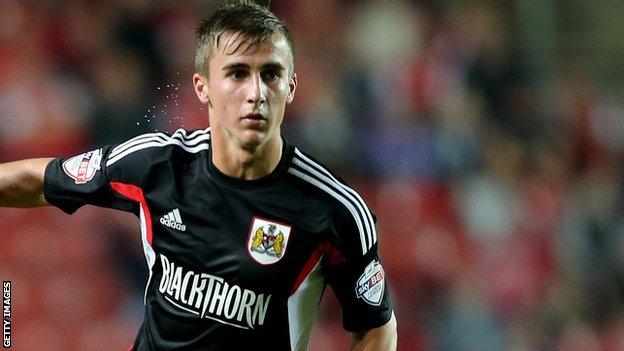 Jay Emmanuel-Thomas opened the scoring for the visitors with a powerful strike from distance, but Tamika Mkandawire equalised with a brilliant 30-yarder.

Centre-back Mkandawire then turned Sam Baldock's low cross into his own net, only for Paul Parry's well-placed header to level the scores once more.

But Bryan nodded past goalkeeper Joe Anyon to win the match for City.

The Robins, who secured back-to-back league victories for only the second time this season, moved up to 17th, three points clear of 21st-placed Stevenage.

"It is disappointing, especially when the goals you give away are poor.

"I thought there was only one way the game was going to go when we got back in it at 2-2.

"It has been ups and downs all season, but we still have plenty of games left - they are coming quick and we have to be ready.

"I think we deserved at least a point today. We are lacking consistency, and once again it is down to fine margins and detail. That's the difference when it comes to games like this."

"At the end of the day there were some balls being put into our box, I think they were quite a direct team, and you have to be able to deal with it.

"When you do face a team like that as long as you do your job properly there shouldn't be a problem, it's normally when you've got clever players around you.

"I'm not saying they don't have clever players but it ended up being a direct game and as we see in the second half the wind picked up and that's been the bane of my life since I've been the manager of Bristol City.

"I was talking to the boys afterwards and they had said it was quite difficult to get out in the second half. You have to be very good with the ball, which we were at times - but not good enough at times."