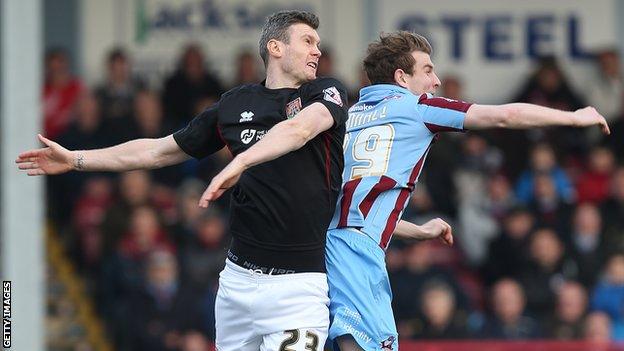 Zander Diamond headed his first goal for 10-man Northampton to deny Scunthorpe a victory that would have taken them to the top of League Two.

After a largely forgettable first half, Niall Donovan nodded the home side in front from Andy Dawson's corner.

Northampton's Ricky Ravenhill was sent off for a second yellow card, but after Diamond's equaliser, keeper Matt Duke denied Paddy Madden to secure a point.

The draw extended the Iron's unbeaten run to 19 matches, equalling a club record set in 2006-07, but Russ Wilcox's side had to settle for climbing above Rochdale into second place in the table on goal difference, having only won two of their last 10.

Northampton have not lost in four games, but remained second from bottom and six points adrift of Accrington, the team immediately above them, who beat leaders Chesterfield 3-1.

"I've got a great group of players that are working so hard. Today we were just a little bit naive on managing the game.

"I can't understand the negativity at all. we are 19 games unbeaten now, it's a club record. I think the expectations have gone through the roof, we have to manage that wisely, but the players are focused and ready for [the next game on] Tuesday.

"There are not a lot of positives from today from my point of view. I probably feel the most disappointed I have felt in the 19 games because we had chances to win that game."

"We knew we were coming to a team at the top of the table on a fantastic run and I've got to say the manager here is doing a great job.

"After having Ricky Ravenhill sent off, the players put in a superb shift to get a point from the game.

"I think we've shown to everyone else in this league that we're a dangerous team in the last few weeks.

"I'm delighted with the result, with the attitude of my players and it's onwards and upwards to the Exeter game on Tuesday night."