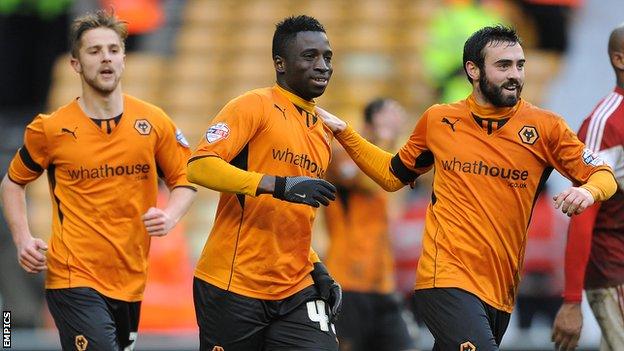 Wolves kept their League One automatic promotion challenge on course and recorded a club-record-equalling eighth straight win by beating Walsall.

The win marks Wolves' third 3-0 victory in a row and means they have now not conceded in six consecutive League One games.

It was no more than the visitors deserved, as Walsall struggled to create a clear chance against the leaders.

Wolves had nearly gone ahead after 20 minutes when Sako cut in and fired in a stinging effort, which Walsall's Richard O'Donnell tipped over.

But the hosts failed to impose themselves on the match following Wolves' first goal, with the result leaving the Saddlers struggling to keep up their challenge for a play-off spot.

"I think the scoreline is very harsh on us - I don't think we any way deserved to lose 3-0. It just showed the quality that Kenny's got.

"The pleasing thing for me is we didn't throw the towel in, we kept going.

"Our performances have been decent, it's just the results that haven't been coming with them and sometimes that happens.

"The important game now is against Crewe and going and getting a result in that and then following up and getting a performance in and hopefully getting the right result."

"It was a great win. A different type of game against a Walsall team with a high motivational level to try to beat Wolves. You could see in their supporters and players.

"It was a key first goal, I thought it was an excellent first goal as well from James Henry. It would have been tough if Walsall would have got the first goal today.

"While it was a feisty game, I did feel the pitch sort of hampered both sides really in terms of their football.

"Particularly with the top of League One as it is, with the very, very high points total that's going to be needed to get promotion this year, then consistency is a must."