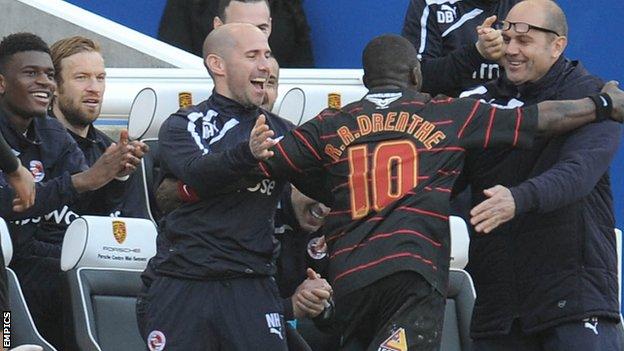 Reading returned to the Championship play-off places as Royston Drenthe's second-half equaliser earned them a point against 10-man Brighton.

Chris Gunter headed David Lopez's cross into his own net to give the hosts the lead in fortunate circumstances.

But Brighton were reduced to 10 men after 51 minutes when captain Gordon Greer was shown his second yellow card.

Reading equalised through Dutch midfielder Drenthe's first goal for the club, a low shot from 15 yards out.

Both sides then had chances to win the match as Nick Blackman shot at Seagulls goalkeeper Tomasz Kuszczak, who also denied Jobi McAnuff late on.

However, Brighton could also have collected all three points as Will Buckley shot wide and then forced Reading's Alex McCarthy into a vital save in injury-time.

Reading, who move above Wigan on goal difference and into sixth place, nearly went ahead inside two minutes as Drenthe beat three men and crossed for Adam Le Fondre, whose goal-bound shot was blocked by defender Stephen Ward.

Brighton took a 17th-minute lead through Gunter's own goal, but Oscar Garcia's side had Scotland international defender Greer sent off early in the second half for two bookable offences, both coming following fouls on Le Fondre.

The striker then headed over the crossbar from Danny Guthrie's cross, before Blackman drove narrowly wide from 20 yards as Nigel Adkins's team pushed for an equaliser.

It came in the 64th minute, when former Real Madrid midfielder Drenthe beat Kuszczak at his near post with a low shot from just inside the area.

Neither side could grab a winner and the draw keeps Brighton in eighth, two points behind Reading.

"The sending off completely changed the game. We had the match completely under control, we were 1-0 up and expecting a good second half.

"I'm proud of all of my players for the performance and how they competed against a big team.

"We showed great character and, even though we only had 10 men, we still created some good chances and could've won it."

"We gave away a poor goal, but we re-grouped and came very strongly in the second half.

"Brighton play some good football; I enjoy watching them play and coming from behind is pleasing after the week we've had with players on international duty.

"The squad has stepped up and done very well. We're in the mix and have some good players in the club who want to do well."