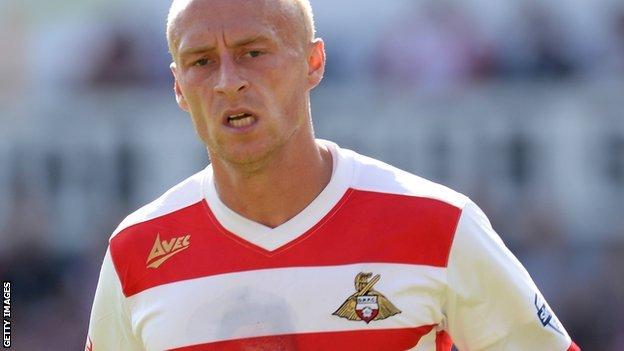 The home side took the lead when a David Cotterill corner was headed down by Gabriel Tamas and Billy Sharp flicked the ball home from close range.

Huddersfield almost equalised but Paul Keegan cleared a header from Anthony Gerrard off the line.

Rovers regained control and extended their lead when Mark Duffy crossed for Cotterill to slot in.

The victory helped Doncaster bounce back from a 5-0 thrashing at Bournemouth in their previous game.

Huddersfield had enjoyed a 5-0 win against Barnsley in their last outing but fell to a seventh defeat in the past 10 games.

The Terriers began strongly but, despite their pressure, it was Doncaster who had the first shot on target when Sharp had a 20-yard effort saved.

Rovers had an appeal for a penalty rejected when Gerrard appeared to push Chris Brown, but they took the lead when Sharp scored on his return to the side after a three-match ban.

Huddersfield hit back towards the interval with Nahki Wells denied by a great tackle from Abdoulaye Meite, before Adam Hammill had a shot saved by the legs of home goalkeeper Sam Johnstone.

Keegan cleared a header from Gerrard off the line before the home team asserted themselves again to take control.

Rovers wrapped up the points when Chris Brown fed Duffy in clever style and the winger crossed for Cotterill to score.

Huddersfield struggled to respond, although substitute Martin Paterson had an angled effort saved as they battled to the finish.

"We owed the fans after the 5-0 defeat against Bournemouth where we let ourselves and them down.

"I said to the players before this game not to leave anything out there and when you have a team willing to run and put their bodies on the line then you are difficult to beat.

"We need to keep our standards high because we know we are capable of beating most teams when we play like that."

"I thought Doncaster were physically stronger and more up for the game and it's embarrassing for me to say that.

"We did have a spell at the start of the game but it didn't last and we didn't look like scoring. We didn't have any teeth - they seemed to want it more.