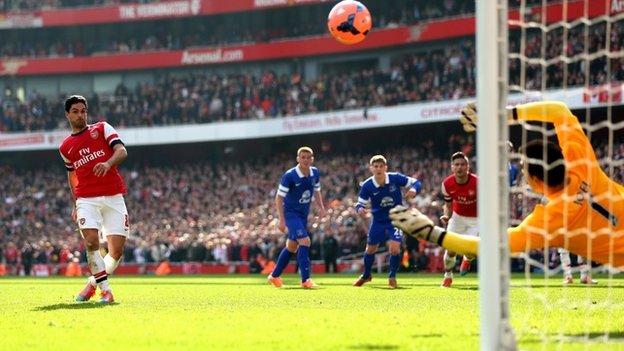 Arsenal stayed on course to end a trophy drought stretching back to 2005 as they secured a place in the FA Cup semi-finals at Wembley with victory over Everton at Emirates Stadium.

In a quarter-final that was closer than the emphatic final scoreline suggests, Mesut Ozil gave Arsenal an early lead but Romelu Lukaku tapped in from almost on the goalline to equalise for Everton before half-time.

As well as scoring one goal and providing an assist for another, Mesut Ozil created five chances in the win - three more than any other Arsenal or Everton player.

Substitute Olivier Giroud then struck twice in the last 10 minutes to give the hosts a winning margin that was harsh on Everton, who were in the game for so long - but there can be no question Arsenal deserved to win.

It was a vital win, too, as the FA Cup emerges as the Gunners' best hope of claiming their first silverware since winning this tournament in 2005.

The manner of the victory also provides the perfect platform for the arduous Champions League task awaiting them on Tuesday as they try to overturn a 2-0 deficit in the second leg of their last-16 tie against Bayern Munich in the Allianz Arena.

For Everton manager Roberto Martinez, there is to be no place in history as the first manager to retain the FA Cup at different clubs and he must now concentrate on claiming a place in Europe via the Premier League.

"Arsenal's season will be lifted that little bit extra now.

"Will manager Arsene Wenger now look at the FA Cup games and say these are the most important - to try to finally win a trophy?

"I suspect that after this result that is what he will be thinking."

Martinez maintained his FA Cup policy of playing second-choice goalkeeper Joel Robles - who won this trophy with him at Wigan last season - ahead of the established Tim Howard.

And the young Spaniard had a desperately uncertain first half, mixing good stops from Yaya Sanogo, Thomas Vermaelen and Oxlade-Chamberlain with a stubborn - not to mention very hazardous -determination to punch everything, including one anxious moment when he turned Bacary Sagna's cross on to the bar.

But Robles was blameless as Arsenal took the lead after only seven minutes. James McCarthy was unlucky to slip in pursuit of Santi Cazorla, whose pass was steered home from the angle in composed fashion by Ozil.

Arsene Wenger's men had gained control of the game but the strong running of Ross Barkley was emerging as the biggest danger to them - a threat realised when Everton drew level as half-time approached.

The England youngster surged deep into home territory and when Kevin Mirallas turned his cross into the six-yard area Lukaku was left with the simplest of touches into an empty net.

The Belgium international had been on the margins of the action but his sheer physical presence forced Vermaelen into a slip that almost saw Everton take the lead just after the break.

No reward for Toffees at Gunners

Everton have won none of their past 20 away games against Arsenal in all competitions (D4 L16).

The Toffees' giant striker left his countryman grounded before setting up Barkley, who should have hit the target from 12 yards.

Robles was certainly a mixed bag and he produced a fine save from Cazorla, diving low to his left to turn his shot around the post.

Arsenal were back in front when Barry somewhat needlessly upended Oxlade-Chamberlain in the area. Arteta beat Robles from the spot with his first attempt, only for referee Mark Clattenburg to order a retake as Giroud had encroached. But there was no reprieve for Everton as Arteta kept his cool to beat Robles expertly again.

Barkley was again the threat for Everton with 15 minutes left when he swept an effort inches wide of the far post with Lukasz Fabianski beaten.

Arsenal gave the scoreline a comprehensive look as Giroud struck twice in the closing minutes, almost stooping to his knees to turn in Sagna's cross after 83 minutes then adding his second two minutes later after being played in by Ozil.

Everton manager Roberto Martinez: "I felt the key moment of the game was going to the second goal and we had made it a real uncomfortable game for Arsenal.

"We had a great chance and, in nine out of 10 situations like that, Ross Barkley will hit the target.

"I can see why the referee gave the penalty, although I don't agree with the decision completely, because there is contact but the ball is challenged by both of the players.

"After that, we gambled a bit and the final scoreline does not reflect what happened in the game."