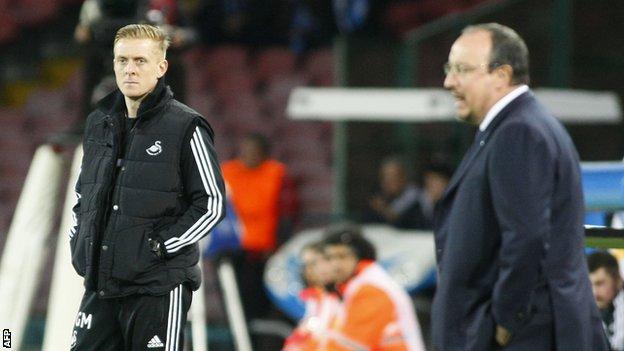 Garry Monk is hoping Swansea City's Europa League exploits will inspire his side to retain their Premier League status.

Monk's side return to domestic action on Sunday at home to Crystal Palace.

"If the players can't take the belief they've had from these two games into the league then I don't know what will," Monk said.

"They've been fantastic and they have to keep the momentum going of the performance levels.

"I've said all along if you play like that you'll win way more games than you will ever lose."

The Swans are currently 12th in the Premier League table but only four points clear of third from bottom Sunderland.

He [Tony Pulis] has got them together, he's galvanised them and be a very hard team to beat, very organised, very structured

Monk says he not set his side any points target from their remaining 11 games and the Swansea boss is not looking beyond Sunday's game against Crystal Palace.

"I just want to win the next game, it has to be that way" Monk added.

"I can't say 'let's win four or five games'. I know everyone is saying if you get 40 points statistically you're always safe.

"That is true but we don't look at it like that. We look at it that we've got to do all we can to beat Palace on Sunday."

Monk, in his first managerial role since replacing Michael Laudrup, has hailed the impact made by Tony Pulis since he was appointed Palace boss in November.

Pulis took over a side in the bottom three, but the experienced Welshman has transformed their fortunes, taking them from six points off safety to their current 16th place.

"But he's showed what a good manager he is.

"He's got them together, he's galvanised them and they are a very hard team to beat, very organised, very structured."

Swansea are looking to do the double over Palace having beaten them at Selhurst Park in September 2-0.

Monk is expecting a much harder match this time around.

"We're in for a very tough, very physical game and it's one we're going to have to be ready for," said Monk.

"Our energy levels have to be at the right place to make sure we compete."