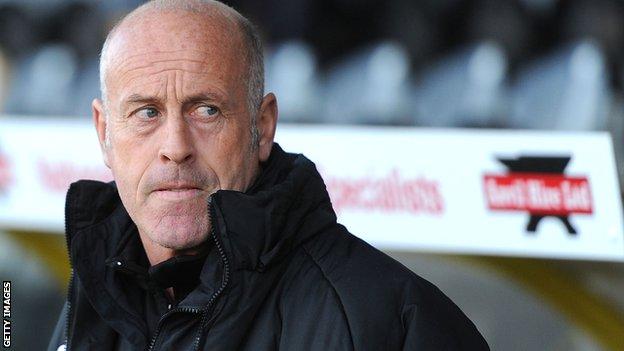 Morrell stepped down this week having failed to win promotion back to the Football League.

Foyle is a former Wrexham coach and is now boss of Hereford, who host the Dragons on Saturday.

"I think Wrexham need a Conference manager that knows the players and the ropes because it's a hard league to get out of," Foyle said.

"It's not all about gaining promotion. It's about knowing the players, the opposition and the teams that you're up against and also wheeling and dealing.

I enjoyed myself there. [It's a] fantastic club but I'm doing a job down here at the moment and until I know anything different I carry on as normal

"There's a lot of good players that can be had on loan in the second half of the season and I think that's major.

"It's not all about getting a squad together at the start of the season, it's how you wheel and deal throughout the season which makes some teams stronger."

Wrexham lost their Football League status in 2008 after losing 2-0 to Hereford, the side they face in the Conference Premier on Saturday.

The Dragons reached the play-offs twice under Morrell, losing to Luton in the semi-final in 2012 before a defeat in the final against Welsh rivals Newport last season.

"People expected Wrexham to be up there, but sometimes that play-off defeat can hurt you and it's probably taken a little bit of time to recover from it," Foyle said.

Foyle, who started his managerial career in the Football League with Port Vale, has also managed York City in the Conference.

The 50-year-old has been one of the names mentioned as a successor to Morrell but refused to be drawn on any speculation.

"I enjoyed myself there. [It's a] fantastic club but I'm doing a job down here at the moment and until I know anything different I carry on as normal," he added.

Caretaker manager Billy Barr will once again be in charge of Wrexham at Edgar Street on Saturday, with the Dragons looking to bounce back following Tuesday's heavy defeat away to leaders Luton Town.