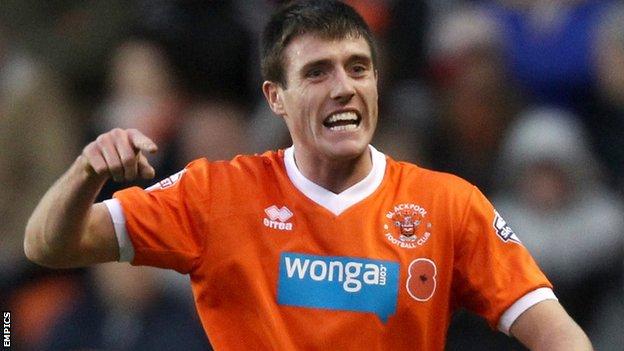 Fleetwood Town have signed Blackpool striker Bobby Grant on loan until the end of the season.

The 23-year-old, who joined the Seasiders from Rochdale in the summer, has failed to score in seven appearances this term.

Grant has been sidelined with a knee injury since December, but is available to face AFC Wimbledon on Saturday.

Fleetwood boss Graham Alexander revealed Grant had been a target last season, and is delighted to finally bring him to Highbury.

"Bobby brings goals, he brings character and he brings personality - he wants to win and he is a very confident lad," Alexander told the club website.

"He is a very good player and we made enquiries to bring Bobby in last season. At the time Bobby had an offer from a Championship club so we fully understood why he chose his move."

Grant is the second player to join the Cod Army on loan this week following Josh Morris's switch from Lancashire neighbours Blackburn on a month-long deal.

The loan agreement does, however, give Blackpool the right to recall the striker after 28 days.