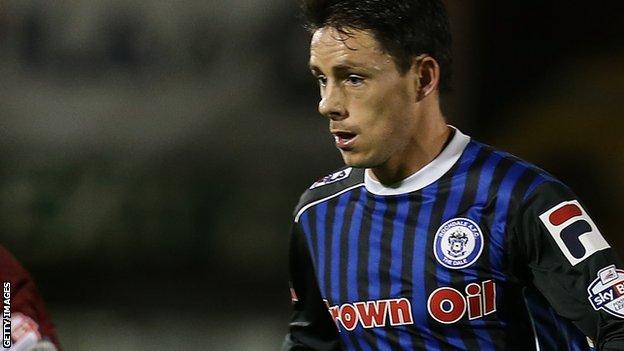 Ian Henderson was shown a first-half red card as Rochdale missed the chance to go top of League Two after a goalless derby draw at Bury.

Rochdale had lost their top goalscorer Scott Hogan to injury, before Henderson was shown his second yellow.

Bury's Pablo Mills hit the bar and Tom Soares had an effort saved by Josh Lillis after the break as George Porter was denied by home keeper Brian Jensen.

Lillis then foiled Daniel Nardiello and Jake Carroll late on.

"Obviously I'm disappointed that we've not got all three points.

"We've had opportunities to finish it off, that's the real frustration, that we've not done [so].

"We've come up against a good team. We have and even though they've only got 10 men, they're resilient, they're full of quality and they've shown that. That's why they're at the top of the league.

"People talk about them being a good footballing team. but there's a character about them."

"It's difficult being a referee, but I was really, really unhappy with the sending off because it could have spoilt the game.

"I think the game was still worthy watching and I thought we performed superbly with 10 men, but we're without Ian Henderson for Tuesday night and he doesn't deserve that.

"If we're talking about the correct and incorrect decisions, he's got away with a few tonight because he's made some bad decisions, but I do believe he's a good referee. He's like players and managers, we do make mistakes."