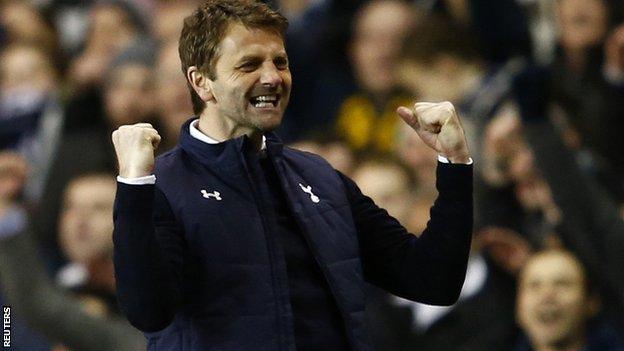 Tottenham manager Tim Sherwood has urged his players to display the same character showed in the Europa League win against FC Dnipro in their quest for Champions League qualification.

Spurs were 2-0 behind in the last-32 tie before scoring three second-half goals to progress over two legs.

"We need to play with more character, more spirit, on a consistent basis," said Sherwood.

"It's a good platform, a learning curve and we can point to it in the future."

Tottenham lost 1-0 in the first leg in Ukraine last Thursday and knew they had to score at White Hart Lane to stand any chance of progressing to the next stage.

Tottenham have recovered from losing positions to win 10 Premier League points this season. They have won three games and drawn one after going behind.

But they had not scored in their previous two games after suffering defeat at Premier League strugglers Norwich on Sunday.

It was the third time in five top-flight matches that fifth-placed Spurs had failed to win, leaving them six points adrift of the Champions League qualification spots.

Despite controlling the first half against ex-Tottenham boss Juande Ramos's Dnipro, Spurs failed to make their dominance count and their task become harder after Roman Zozulya headed the visitors ahead on the night.

Midfielder Christian Eriksen pulled a goal back before Zozulya was sent off for headbutting Spurs defender Jan Vertonghen.

The numerical advantage allowed the north London side to take control and Emmanuel Adebayor's quickfire brace set up a last-16 clash against Portuguese league leaders Benfica next month.

"After conceding so early in the second half, it was a real blow for us, but it was all based on character and desire," added Sherwood.

"I always felt we needed to score three goals to go through tonight.

"It was a bit of a nothing game in the first half but we opened them up time and again in the second half."