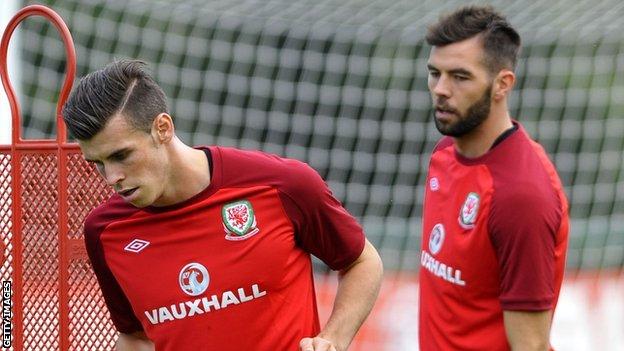 Joe Ledley believes Wales will go into 2016 European Championship qualifying with the best team they are ever likely to assemble.

Chris Coleman's side begin preparations for their Group B games with a friendly against Iceland on Wednesday, 5 March.

Crystal Palace midfielder Ledley says having stars such as Gareth Bale and Aaron Ramsey amid a maturing side makes Wales a threat.

"I don't think we'll ever get a better team than what we've got," said Ledley.

"You know, the likes of Gareth Bale and Aaron Ramsey and people like that and you've got the experienced players like Ash [captain and defender Ashley Williams].

"And we're obviously getting older so hopefully this is the best opportunity I think we'll have."

They drew 1-1 at Swansea City on Sunday and host Ledley's former club Cardiff City - also threatened by relegation - in April.

As a Bluebird Ledley saw Ramsey's talent emerge and played alongside him during Cardiff's run to the 2008 FA Cup final.

He says the Arsenal star has proven his critics wrong this season while Bale has become a global star via Tottenham Hotspur and Real Madrid.

"They are both fantastic players," said Ledley.

"I knew Rambo [Ramsey] since he was younger and you could tell straight away how good he was going to be.

"People gave him stick and stuff like that, which was wrong and he's just gone and proven how good a player he is.

"Everyone knew... in the game, how good he was. It was just other people he needed to show.

"For me he's been one of the best players in the Premier League.

"And Gareth has just gone on to another level and signed for a fantastic club, a big club, and he's just doing it week in, week out."

Wales start their Euro 2016 qualifiers away to Andorra on Tuesday, 9 September, then face top seeds Bosnia-Hercegovina at home on Friday, 10 October before welcoming Cyprus on the following Monday.

Chris Coleman's men face Belgium away on 16 November, with the return fixture on 12 June, 2015.

Ledley hopes that when Wales' top talents gather for the campaign, they are at full strength.

He added: "We need to have a good start and make sure everyone turns up and performs and is on their game."