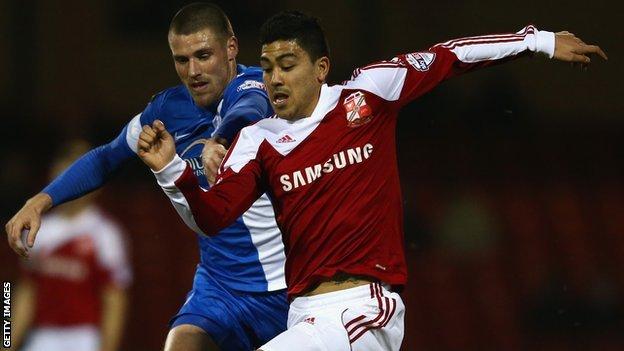 Midfielder Massimo Luongo says receiving his first call-up by Australia is a "reward" for his Swindon form this season.

The Sydney-born 21-year-old has been named in the Socceroos' 23-man squad for Wednesday's friendly with Ecuador at the New Den, London.

Luongo, who has played 41 times for Town this term, told BBC Wiltshire: "I was keen for a call-up.

"After playing regular football, I guess it's a reward for a full season."

Luongo came through Tottenham's academy and had a loan spell at Ipswich before joining Swindon on an initial two-month deal last March.

He made a permanent move to the County Ground in the summer, signing for £400,000 on a three-year contract, and has become a regular fixture in Mark Cooper's team.

Luongo has now been given a chance at international level, and has been mooted as a member of Australia's World Cup squad.

The Socceroos have been drawn in Group B for this summer's tournament in Brazil, alongside Spain, Netherlands and Chile.

But the midfielder insists he is not looking beyond his potential debut for his country on Wednesday.

"I don't know if I'll play, whether I'll get on," said Luongo. "In the back of my mind, I'm thinking the World Cup will be brilliant, even though we've got a tough group.

"People keep saying 'I hope you go to the World Cup' and 'I hope you get in the squad' but I'm just focused on my first game and my debut."