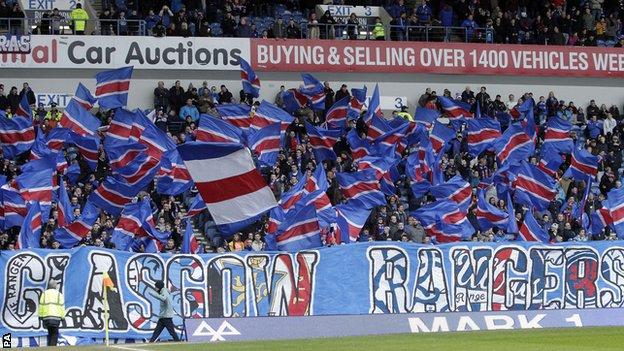 A coalition of Rangers fans has backed former Ibrox director Dave King over his statement on the club's future.

King has urged supporters to withhold season ticket money until they receive assurances about the League One outfit.

A statement from the Union of Fans said they support placing season ticket money in a trust to be released to the club on agreed terms.

"We cannot doubt the intentions of one of our own who has previously committed £20m to the club we love," they said.

The Union of Fans, which includes six Rangers supporters' groups, has established a website where fans can sign up and indicate their support for the idea.

We have no confidence in the current board and would ask Dave King, following his statement yesterday, to set up a trust where fans can place our season ticket money to be released to the club on agreed terms

The group says "events over the past few days have left us deeply concerned, once again, about the direction our club is being taken in".

It also criticised the club's recent decision to borrow £1.5m of working capital from the company's own shareholders.

"We have waited patiently, as requested by [chief executive] Graham Wallace, to see progress as part of his 120-day review, but feel that the latest decision from the board, to line the pockets of shareholders who showed a total disregard for the wishes of fans at the recent AGM, is yet another kick in the teeth," the group said in their statement.

"We do not believe that taking a short-term loan, at both an inflated rate and securitised against club assets, is addressing the need for a long-term solution and urgent investment, and we have seen nothing to suggest this is part of a robust long-term plan."

The statement also called upon King to establish a mechanism for fans to withhold their season ticket money, although stopped short of a full season ticket boycott.

The statement continued: "We have no confidence in the current board and would ask Dave King, following his statement yesterday, to set up a trust where fans can place our season ticket money to be released to the club on agreed terms.

"We would also ask him to lobby all non-aligned shareholders and form a new Shareholders Group to challenge the anonymous shareholders behind Blue Pitch Holdings and Margarita, then take control of the board."

Craig Houston, of the Sons of Struth, told BBC Scotland that supporters were keen for King to become involved.

"The fans see him as the knight coming over the hill to help," said Houston.

The Sons of Struth describes itself as "a body of like-minded Rangers fans who hold dear the values of" former manager Bill Struth and claims to have the backing of most of the club's supporters groups.

King is concerned about the implications of the club announcing last week that they are to borrow £1.5m from two shareholders.

The South African-based businessman said his own offer to put fresh investment into Rangers was rejected.

Houston said supporters were seeking greater transparency from the current Ibrox board, adding that King's input would be welcome.

"A lot of fans, the feedback we're getting is that it sat nicely with their thoughts and views," Houston told BBC Scotland.

"It was a good statement and very hard-hitting; there's not a lot you can disagree with.

"There's been a lot of cry outs for Dave King to get involved and speak out."

Rangers chief executive Graham Wallace last week insisted that the club were not under threat of a second period in administration before this week confirming the loans from Sandy Easdale and Laxey Partners Ltd.