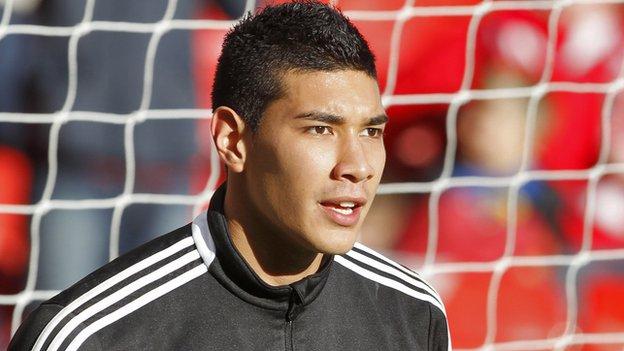 Crewe Alexandra manager Steve Davis hopes that an aggravation of his on-loan keeper Neil Etheridge's thigh injury is "nothing too serious".

After returning from Fulham to resume the loan he had prematurely curtailed in November, the Philippines international, 24, was drafted straight in for Tuesday's trip to Stevenage.

But he had to play through the pain barrier in his side's 1-0 defeat.

Injuries at the Alex

"Neil came in at half-time complaining about his thigh," Davis told BBC Sport.

"He was in discomfort but was keen to continue.

"We are hoping that the injury is nothing too serious. We will have to assess how he is and will remain in contact with Fulham.

"We have brought him back in because he is a good goalkeeper. He has played for his country a lot of times and did very well for us in his first loan spell. and has a lot of experience for a 24-year-old."

Etheridge's recall came at the expense of teenager Ben Garratt, who had been in goal for Crewe's previous 13 games, during which time he has done enough to be awarded an extended contract.

"Ben has done fantastically well ever since he came into the team," added Davis.

"I had a conversation with him on Monday and explained the reasoning on why we were bringing Neil back. Although he was naturally disappointed, he understood it and was fine with it.

"Ben has a bright future in the game and will be a big part of the plans here over the next few years."