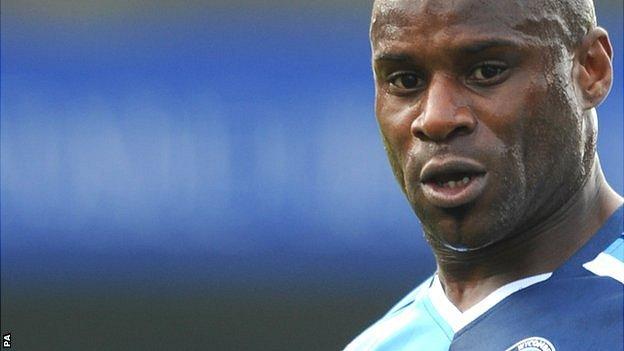 Former Chelsea defender Frank Sinclair says he has not been approached by Wrexham about the vacant managerial position.

Andy Morrell stepped down as Wrexham manager after two and a half years in charge of the Conference Premier club.

"I'm not aware of any approach from Wrexham so I can't really comment any further on that," Sinclair said.

"I'm fully focused on my job at Colwyn Bay and fully respect the club."

Airbus UK Broughton manager Andy Preece, a former Wrexham striker, and The New Saints boss Craig Harrison told BBC Wales Sport they had not been approached for the job either.

Wrexham chief executive Don Bircham says the club have received almost 100 applications for the job but insisted the club would not be approaching anyone with a view to appointing them.

Morrell's assistant Billy Barr was in temporary charge for the first time as Wrexham fell to a heavy 5-0 defeat away to Conference Premier leaders Luton Town.

Sinclair succeeded Lee Williams as Bay manager in February 2013 and saved them from relegation from the Conference North last season and they are eight points off the play-offs this term following Tuesday's 1-1 draw against Gloucester City.

The former Jamaica international played alongside Morrell during a two season spell with Wrexham under Dean Saunders.

"Wrexham are a big club, one of the biggest in Wales and they have certainly under-achieved over the past few years," Sinclair told BBC Wales Sport.

"I enjoyed a great couple of years there and I've still got a great affiliation with the club. It's a shame things haven't worked out for Andy.

"I've thanked him for the way he helped me at Colwyn Bay by giving me a couple of players and allowing us to use their training facilities."