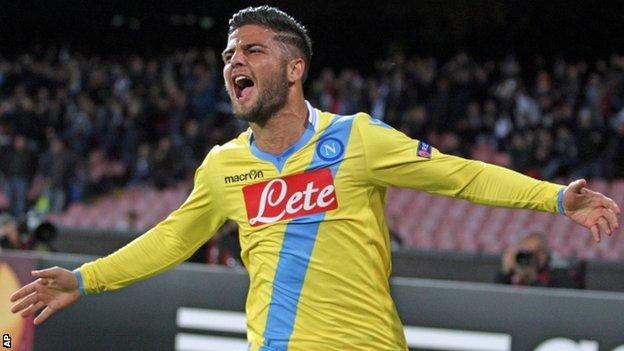 Swansea were agonisingly knocked out of the Europa League by Napoli as Gonzalo Higuain and Gokhan Inler scored two goals in the last 12 minutes.

After the first leg finished goalless, Rafael Benitez's side took the lead through Lorenzo Insigne's lob.

Jonathan de Guzman equalised with a powerful low shot which looked to have put the Swans through on away goals.

Before the second leg Napoli's goalkeeper Pepa Reina had never conceded a goal against Swansea.

But Higuain's hooked shot and Inler's tap-in at the death sent Napoli through.

It was a bitter blow to Swansea who looked more threatening throughout the second leg and showed plenty of character after going behind.

The Swans enjoyed a lot of possession early on but mostly in their own half as Napoli pressed high up the pitch.

Yet it was a counter-attack which nearly gave Garry Monk's side the lead.

Pablo Hernandez's cross-field pass found Marvin Emnes who flicked the ball towards goal over the advancing Napoli keeper Pepa Reina, but it was cleared off the line by Raul Albiol.

Former Real Madrid striker Higuain should have put the Italians in front when he found himself with time and space eight yards out but the Argentine fired his effort over the bar.

Moments later a defensive mix-up saw Italy striker Insigne get in behind the Swansea back four, some of whom had tried to play the offside trap, and the 22-year-old lobbed the ball over Swans keeper Michel Vorm to give Napoli the lead.

The 900 or so Swans fans at the Stadio San Paolo may have feared the worst against the Italians, who are third in Serie A and only dropped into the Europa League after missing out on progression to the Champions League knockout stages on goal difference.

But the Welsh side, who also knew an equaliser would potentially be good enough to send them through, took the game to their hosts.

Swansea's striker Wilfried Bony was proving a handful and the impressive Hernandez thrived in his more central midfield role.

When a Napoli attack broke down, the Spaniard and De Guzman looked to link up and feed off Bony and it was not long before the approach brought the Swans level.

Bony's flicked pass into the path of De Guzman sent the Dutchman clear and his low shot beat Reina to bring the scores level.

Instead of sitting on their lead Swansea continued to attack and looked dangerous on the break.

Napoli were largely restricted to long-range efforts and the home fans became increasingly frustrated as the game wore on.

Swansea's Dwight Tiendalli had an appeal for a penalty turned down after falling in the box following a challenge by Napoli defender Faouzi Ghoulam.

Bony spurned a great chance to put the Swans in front when he could only head Hernandez's cross straight at Reina.

Swansea appeared to be cruising through to the last 16 until the predatory Higuain reacted quickest to hook a loose ball past Michel Vorm inside the box.

Monk's men pushed forward in search of a late equaliser but were caught on the break deep into injury time with Inler's finish sealing the win for Napoli.

Shots on Target
Home4
Away12