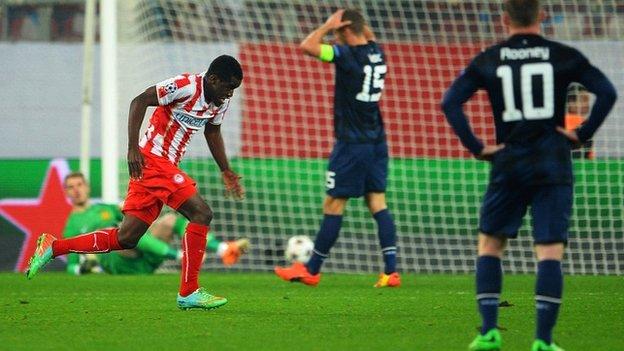 Joel Campbell said he was was thrilled to celebrate his goal for Olympiakos with his father during the Champions League win over Manchester United.

The 21-year-old Costa Rica midfielder, on loan from Arsenal, also said the last-16 tie is not over after his strike earned a 2-0 first leg lead.

"My father was sitting at the stand, and that was my greatest joy," he said.

"Nothing is over. The second-leg match will be a tough one; we still need one goal to say, yes, now it is over."

Who is Joel Campbell?

Campbell, who has yet to play for the Gunners, scored from 25 yards on Tuesday to give the Greek side a huge advantage heading into the return leg on 19 March.

He is also expected to be in the Costa Rica squad that will face Group D rivals England at the World Cup in Brazil.

Campbell signed for Arsenal from Costa Rican side Deportivo Saprissa in August 2011, and has said he wants to break into Arsene Wenger's team next season.

Asked about his future with Olympiakos, where he is on a season-long loan, he replied: "I cannot talk about that right now, I cherish this year, we just won a crucial match and I want to enjoy that."