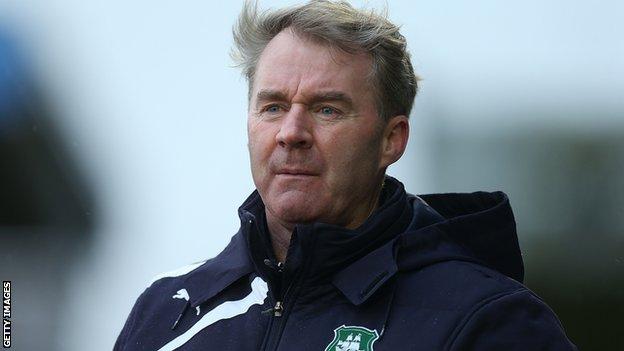 Plymouth Argyle boss John Sheridan has urged his players to keep their feet on the ground after moving within sight of the League Two play-off places.

Argyle's 4-0 win away to Fleetwood has taken them to eighth in the table, four points off the play-off spots.

"It's three points, the results went our way and we've just to keep this run going," he told BBC Radio Devon.

"We'll just concentrate on ourselves, try not to get carried away and work hard to get a result on Saturday."

The Pilgrims' excellent away form has seen them gradually climb the table after spending much of the season seemingly out of contention for a promotion push.

But Sheridan said his players would have to string more results together in order to really get themselves in the running.

It's a fantastic result but we haven't achieved anything yet

"I've always said you've got to try to win five or six on the trot to try to get involved with the other teams," he said.

"It's still really tight. We've won our last two and it gets you closer to people but you can soon slip away. You can easily lose three or four or win three or four."

Fleetwood Town occupy one of the play-off places, making Argyle's comprehensive victory all the more impressive.

"I think it was very good, especially when you think who we were playing - a team going for automatic promotion. I thought we were outstanding," said Sheridan.

"I keep saying to the players that they should have a bit of confidence in themselves as footballers and go out and the pitch and be confident.

"We did that and I thought we looked a really good team - to score four at Fleetwood is very good and the plus is also that we were working hard to keep a clean sheet at 3-0 or 4-0 up. Players were running 60 or 70 yards to make sure we didn't concede and I like that.

"We were a threat all night. You have to work hard against them, they move the ball well and they're having a good season and I expect them to be up there at the end of the season. We forced them to make mistakes and didn't let them settle.

"I'm hard on them on the sidelines because I expect high standards. At 4-0 Tope Obadeyi gave the ball away three times in the last few minutes and I'm trying to tell him 'don't do it because I don't like it'. I don't have to keep praising them in the media - they know what I'm like.

Argyle skipper Conor Hourihane, who rounded off the scoring with an excellent free-kick, also urged caution after the team's second successive away win.

"It's a fantastic result but we haven't achieved anything yet," he said.

"It would make it all the sweeter if we can get into the play-offs and get that thing we were looking for at the start of the season: promotion.

"Nights like this are rare in football but you never know what's round the corner."