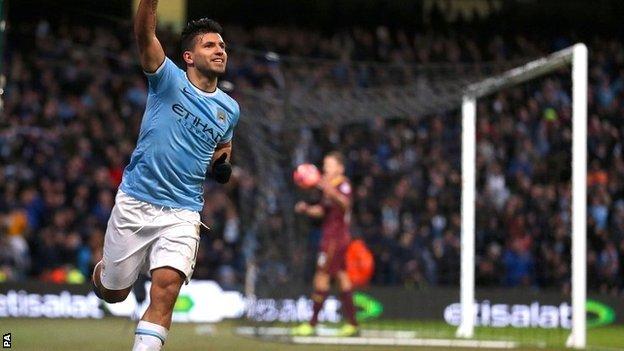 Manchester City's top scorer Sergio Aguero is in contention to play in Sunday's Capital One Cup final after returning to training on Tuesday.

The Argentine striker has missed the past month with a hamstring injury, sustained in a 5-1 win at Tottenham.

During that time, City have failed to score in three of five matches.

But the 25-year-old came through a first-team session with no reaction and could feature in Sunday's game against Sunderland at Wembley.

Aguero's importance to the City team has been underlined during the past month, during which they have lost at home to Chelsea in the Premier League and to Barcelona in the Champions League.

Following the defeat by Chelsea, City drew 0-0 at Norwich and managed a 1-0 victory over Stoke at Etihad Stadium on Saturday, thanks to Yaya Toure's goal.

City boss Manuel Pellegrini has admitted that Aguero's fellow strikers Alvaro Negredo and Edin Dzeko have not been 100% fit, while Stevan Jovetic was replaced against Stoke after suffering from cramp.

But he will hope to have all four available for Sunday as he seeks to win the first trophy of a targeted quadruple.

Aguero, who has scored 26 goals in all competitions this season, has already had a spell on the sidelines after injuring his calf in December.

City team-mate Samir Nasri said: "It is going to be a big boost for the team [having Aguero back], but you cannot disrespect Alvaro Negredo and Edin Dzeko.

"They have done a great job too. It will be good when another striker comes, and with Stevan Jovetic and them we can rotate and be more fresh."