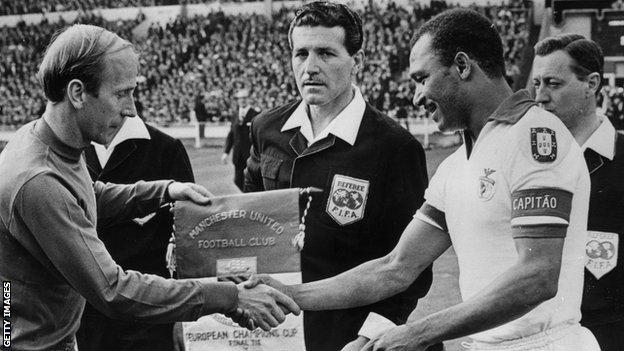 Mozambique is to give a state funeral to former Benfica and Portugal captain Mario Coluna, who has died at the age of 78 after a pulmonary infection.

Coluna, a midfielder, helped Benfica win the European Cup in 1961 and 1962 before captaining Portugal to third place in the 1966 World Cup in England.

At the end of his career, Coluna returned to his native Mozambique, a former colony of Portugal, and went on to coach the national team.

He then became head of Mozambique's football federation and also sports minister.

Benfica president Luis Filipe Vieira said in a statement on the club's website: "He was and will always be a football genius who magnified football and projected Sport Lisboa e Benfica to a global dimension."

Coluna was born in 1935 and began his playing career in Maputo, joining Benfica in 1954.

He went on to score 150 goals in 677 games for the club, helping them win and then retain the European Cup. Coluna would play in three more European finals, though all ended in defeat.

Also part of that great Benfica team was Eusebio, who had made the same journey from Mozambique to Portugal.

Both players were also part of the Portugal squad at the 1966 World Cup, where Coluna's creativity helped Eusebio finish as top scorer.

Eusebio died in January 2014 and, little over a month later, Benfica, Portugal and Mozambique are mourning another of the game's greats.