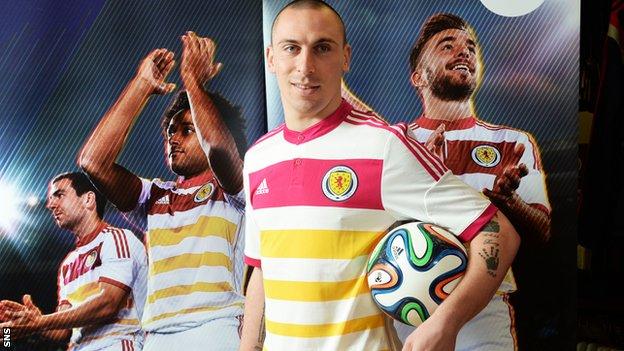 Scotland midfielder Scott Brown believes the national side will qualify for the Euro 2016 finals.

Speaking at the launch of the national side's new away kit, Brown said next week's friendly against group rivals Poland takes on added significance.

Scotland and the Poles are in Group D alongside Germany, Republic of Ireland, Georgia and newcomers Gibraltar.

Nations must finish in the top two in their group to qualify, with the best third-placed finisher also qualifying.

The remaining eight third-placed teams go into the play-offs in November 2015.

Scotland's new away strip "is a fun, modern interpretation of one of Scotland's most iconic jerseys and pays homage to the colours of Lord Rosebery," according to the Scottish FA website.

"First worn in the 1880s and continued throughout the next two decades, Scotland played in the primrose hoops which were synonymous as the racing colours of racehorse owner Archibald Philip Primrose, Lord Rosebery, who was an early patron of Scottish football," the SFA said.

Reacting to the new kit, Brown said: "It will certainly make us stand out from the crowd, and that's exactly what we will need to do to qualify for Euro 2016.

"There is a lot of optimism ahead of this campaign and the new away kit will help us make a bright start."

Gordon Strachan's side face Poland in Warsaw on 5 March as they continue their preparations ahead of the Euro qualifiers.

Scotland will begin their quest away to Germany on 7 September before hosting Georgia for their first home match the following month.