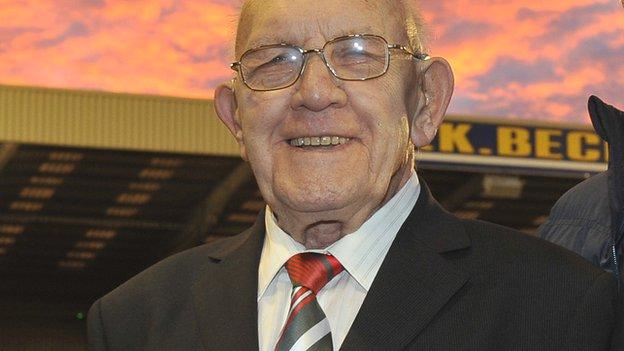 Norman Rimmington clasps my hand between his. The hard, enveloping hands of a goalkeeper, mechanic and fitter. Hands that have pounded shoulders and thighs on the treatment table. Hands that have tended the Oakwell pitch and scrubbed clean mountains of muddy kit. Hands of a Barnsley fixture and legend.

Hands that signed a contract for £3 a week in 1946. Take it or leave it or head back down pit. Hands that grasped thin air as the late, great Sir Tom Finney lashed a hat-trick past him in 1947. Hands that stayed loyal through thin and through thick. But mainly through thin.

Here's Norman in the Oakwell laundry room - or 'Rimmo', as he's known to all at the club - still grafting for his beloved Barnsley at the age of 90. Looking out on the club car park, at the white Range Rovers and Mercedes, extravagances even Finney could only dream of.

"Tom Finney were the finest player I ever saw," says Norman of the Preston North End and England great, whose funeral takes place on Thursday.

"When Barnsley played Preston in the FA Cup, it were no score at half-time. Start of second half, our centre-half said to our left-back: 'Give me five minutes with him, I'll sort him out.' They beat us 6-0 and he scored three of them.

Better, therefore, than Manchester United's Wayne Rooney, who recently signed a new deal worth £299,997 a week more than Norman's first contract with the Tykes.

"He's going to earn £85m in five years," says Norman in his thick Yorkshire drawl. "What do I think about it? I'll be honest, I can't get me head round it."

"It was tremendously rough," says Norman. "You really used to get some stick as a goalkeeper. They could knock you into back of net and it were a goal. It's not the same game. Now they go down as if they've been shot and there's nothing wrong with them."

After three seasons with Hartlepools United, as they were then, and a stint in non-League football, Norman hung up his mud-stained boots at the age of 29. Two broken metatarsals, five broken fingers, a broken leg, a dislocated shoulder. A hero to supporters in the stands, fodder to men smoking cigars in the boardroom.

"I broke me leg at Mansfield and were in plaster for about 15 weeks," says Norman. "I got the letter saying 'thank you for your services - blah, blah, blah - but we're not engaging you for next season'. I was in limbo. In the end I says to wife, 'that's it, I've had enough'. So I packed in."

Norman kept his hand in on the training ground and in 1961 he was appointed first-team coach. "I was a fitter at pit," says Norman. "But my appetite for coaching had been whetted. So I took coaching job for £10 a week less."

Here's Norman prowling the touchline, sparring with Huddersfield boss Bill Shankly. "Denis Law were playing," says Norman, "this thin, streaky lad with glasses. I were standing at side of Bill on the touchline and I were going mad because Denis were kicking everybody in sight.

"So I says to our left-half: 'Get him sorted out!' And Bill turns to me and says: 'He'll have a problem sorting Denis out, he can look after himself. He'll be one of the finest inside forwards in football.' Bill were right."

When manager Johnny Steele was shifted upstairs after 11 years in the job, Norman found himself at a loose end. So he got tooled up instead.

"As a player, I'd always had to help out in off-season," says Norman. "And I were a fitter and mechanic, so I understood engines and cutters. So when the groundsman left I said: 'I can do that job.' And I did. I thoroughly enjoyed it. I were out in fresh air, no worries, only making grass grow."

Here's Norman, enjoying the life of Riley. Sat on a wall on the edge of the pitch, admiring his handiwork. "Allan Clarke had just joined as player-manager from Leeds," says Norman. "As he walked past, he turned to me and said: 'This pitch is better than Elland Road.' And off he went.

"Ten minutes later, he invited me into the boardroom and said: 'I want you to be me physio.' I says: 'I don't know about that. I'm out in fresh air, a pair of shorts on, a pair of flip-flops, no pressures.' He says: 'I'll double your wages'. I says: 'Right, I'll do it.' I ended up being Allan's physio and assistant.

"He were a brilliant man, were Allan. When he arranged me testimonial, he rung Brian Clough because he wanted Nottingham Forest. But Cloughie wanted 10,000 quid, for him and [assistant-manager] Peter Taylor.

"Allan said: 'Don't worry about it, but I'll put it in national press that you'll come for 10,000 quid.' Cloughie were back on phone to him in a shot: 'We'll come for nowt!' We got Leeds instead and I bought me house with the money."

'Barnsley is me club'

When Clarke left Oakwell to become manager of Leeds in 1980, he begged Norman to join him. "I said to him: 'Leeds is nothing to me, Barnsley is me club.' But there's not much loyalty in modern football.

"I'm proud to be from Barnsley. Rooney's proud of Manchester United because of that money's he's getting, in't he? His wife spends most of her time in Barbados."

Norman had persuaded Clarke not to resign as Barnsley boss after a 7-2 defeat at Reading. When Clarke moved to Leeds instead, Norman told his chairman that Norman Hunter, Clarke's old Leeds team-mate, should succeed him. So he did. Norman Rimmington PLC: Also available for careers advice and recruitment.

When Norman reached pensionable age in the mid 1980s he packed in his job as club physio and retreated to the kit room. But he never stopped handing out his opinions.

Norman, who can still reel off the formations of Barnsley's greatest teams, who remembers club legend Eric Winstanley as a snotty kid, who spotted Mick McCarthy's potential as a 15-year-old, had earned that right.

Here's Norman, who also used to run coaching courses for the Football Association, telling manager Danny Wilson what he was doing wrong during Barnsley's traumatic single season in the Premier League in 1997-98, when they conceded 82 goals.

"I told him, 'I'd shut up shop, keep kicking the ball into Row Z - you can't go out and play against them lot, they're just too good'."

As he was then, Norman is fearful about the present, which sees Barnsley fighting for their life in the Championship, with Wilson in charge again.

"I'm very, very worried," says Norman. "I've been here for quite a few relegations and quite a few promotions and tension is terrific, whichever way. But we're playing far better than we have done, so we've got a slight chance."

Here's Norman in the Oakwell laundry room, still grafting for his beloved Barnsley at the age of 90. "I were born in Barnsley, brought up in Barnsley and played at Barnsley," says Norman. "I love the club and everything I've done here."