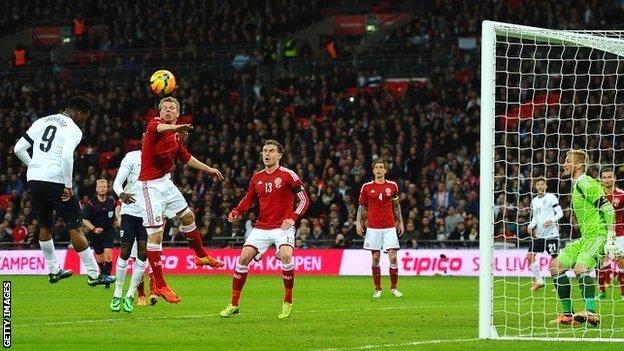 Sturridge was one of five Liverpool players named in Hodgson's starting line-up and the striker carried his rich vein of club form on to the international scene, heading in Adam Lallana's cross for his 12th goal in as many games to give England a first win in three matches.

This was a last chance for Hodgson's players to impress their manager at international level if they are to be included in his travelling party for Brazil, and Sturridge will have done his chances no harm.

His Reds team-mate Raheem Sterling was named sponsors' man of the match for an encouraging display, while Lallana again pressed his case for selection after coming off the bench.

It was only the Southampton captain's third cap, but he looks comfortable on the big stage.

Dour against the Danes

All six international meetings between England and Denmark at Wembley have ended 1-0 (five wins for England, one for Denmark).

Saints colleague Luke Shaw, 18, replaced Ashley Cole at half-time and justified suggestions he will be England's future first-choice left-back, showing ambition and composure on his debut.

For all the encouragement, however, there was also cause for concern in the way England struggled to convert their possession into chances and looked vulnerable to the counter-attack.

There was a general lack of urgency and Denmark, who failed to qualify for the World Cup and lacked genuine quality, still came close to opening the scoring on more than one occasion.

Hodgson will select a 23-man squad and seven standby names on 13 May ahead of a friendly against Peru at Wembley on 30 May. England then travel to Miami for a warm-weather training camp, where they will play Ecuador and Honduras, before flying to Brazil.

Hodgson spoke before the match of replicating the model that has underpinned Liverpool's resurgence - "getting the best from individual players in positions where they feel comfortable" - and he stayed true to that philosophy with an Anfield-heavy team selection.

The early signs were positive as Glen Johnson and Sterling combined well on the right, Gerrard and Jordan Henderson orchestrated proceedings from central midfield, and Sturridge probed for an opening alongside Manchester United's Wayne Rooney in attack.

But too often a touch was poor, passing was slow and movement was disjointed.

There was a scare when Michael Krohn-Dehli volleyed over the bar shortly after even bigger concern as Jack Wilshere writhed in agony following a crunching challenge by Daniel Agger.

But the Arsenal midfielder continued after treatment and from that moment on the hosts seemed to raise their level.

Rooney was agonisingly close to connecting with a low cross from Sturridge and then combined with Cole to tee up Sterling, only for his effort to rebound off a post.

Changing of the guard?

Luke Shaw, who replaced Ashley Cole at half-time to win his first England cap, was just five years old when the veteran Chelsea defender made his international debut

Between those chances, however, England's defence was sliced open by a Krohn-Dehli pass that Jakob Poulsen failed to finish.

England ended the half well to at least raise the flat atmosphere inside a stadium some way short of its 90,000 capacity, Sturridge thwarted by Kasper Schmeichel from close range after Rooney's corner.

As expected, Shaw came on for Cole, allowing Hodgson to assess his back-up options to Leighton Baines, and Lallana soon followed in place of Wilshere.

There was another defensive lapse when indecisiveness from Smalling and Henderson enabled Morten Rasmussen to race clear, only for Joe Hart to burst off his line and save well.

However, the rest of the night belonged to England.

Schmeichel was twice called upon to prevent Welbeck breaking the deadlock - the second time after superb link-up play with Henderson - and the Leicester City goalkeeper displayed fine reactions from a spectacular Sturridge strike.

The pressure told when Lallana found Sturridge with a perfectly weighted cross and the 24-year-old controlled his header back across Schmeichel to send England's fans home happy.