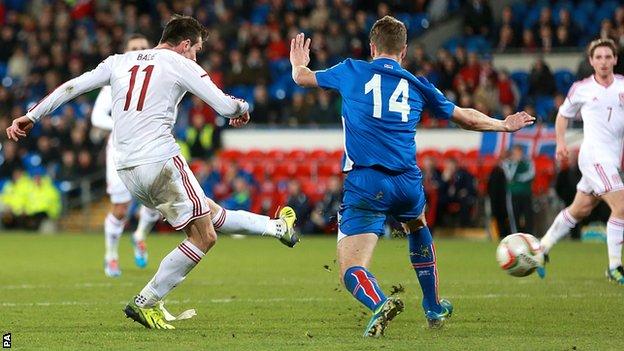 Gareth Bale inspired Wales to an impressive win over Iceland in their friendly at Cardiff City Stadium.

Ashley Williams's own goal brought Iceland level before the break.

But Sam Vokes restored Wales's lead when Bale's shot was blocked on the line, before Bale claimed a deserved goal with a driving run and classy finish into the far corner.

That was the first time that Wales had scored three goals in a game since Chris Coleman was appointed manager in January 2012.

The result, and the performance, was the perfect start for Wales' build-up towards their Euro 2016 qualifying campaign, which begins next September away to Andorra.

Iceland just missed out on a World Cup finals place after losing in the play-offs and seemed ideal opponents to provide Wales with a good, stiff work-out.

The visitors arrived with a full-strength side, while Wales were without injured midfielders Aaron Ramsey, Joe Ledley, David Vaughan and striker Simon Church..

It gave Manchester City 20-year-old Emyr Huws the chance to win his first cap after being named in the starting line-up.

Huws - who has been impressing on loan at Birmingham City - was given the holding role, with Joe Allen, Hal Robson-Kanu, Andy King and Bale ahead of him across the pitch.

Coleman had suggested before the game that he despite a gruelling Madrid derby last weekend.

But there was no sign that the Real Madrid star was looking to conserve his energy.

Given licence to surge down the right, Bale created the first goal - winning the free-kick that he then arced in left-footed for Collins to head home.

The world's most expensive player was again at the centre of two more good Wales chances, first cutting inside to bring a save out of Hannes Halldorsson, then teeing up Robson-Kanu, who failed to hit the target with his header from nine yards.

Iceland had been largely pinned back by Wales' impressive start but found an equaliser when Williams inadvertently diverted Johann Gudmundsson's shot, wrong-footing Wayne Hennessey in the Wales goal.

Vokes, in fine scoring form for Burnley in the Championship this season, had a strong plea for a penalty turned down as he battled for King's lofted through-ball, but Wales had to settle for a 1-1 score at half-time.

Bale continued to torment the Iceland defence after the break and one of his forays resulted in Wales retaking the lead.

Skipping past Ari Skulason, Bale slid the ball towards goal with the outside of his boot. Kari Arnason did brilliantly to get his body in the way but the ball sat up nicely for Vokes to bundle in from a yard.

Bale capped his performance with Wales's third, rounding Solvi Jonsson's rather agricultural attempt to stop him near the halfway line before bearing down on goal.

Three Iceland defenders closed on the Galactico, but Bale just shifted the ball a step to the left before hammering the ball into the far corner.

With the match won, Bale was given a rest for the last 20 minutes - much to the relief of those in blue shirts and probably Real Madrid coach Carlo Ancelotti.

But Coleman showed his own personal progress by matching his more experienced counterpart in the tactical battle - although every manager should be so lucky to have a Bale in their side.