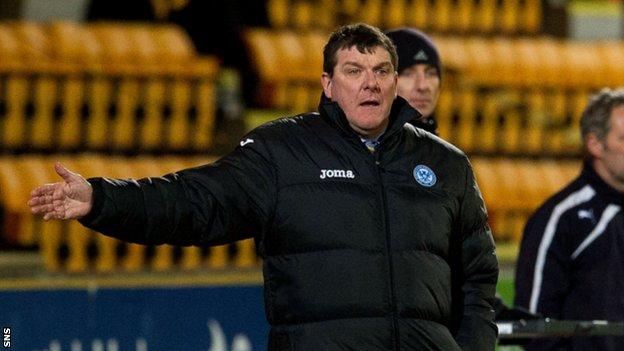 The striker scored twice on his return from knee surgery, while Gary Miller added a third in an emphatic home victory.

"Medically it wasn't a risk to play him, but he hadn't played a game," Wright told BBC Scotland.

"I just felt that we maybe needed a bit of a spark. He is a leader on the pitch."

It was a good team performance. We dominated large spells of the game and that was pleasing

MacLean, making his first appearance since October, netted two first-half strikes as the home side marched three points clear of seventh-place Hibernian in the battle for a top six spot.

"He is one that gets at people," said Wright of MacLean. "He gives them a rollicking when he has to and encourages them.

"I think he's someone that can take the pressure off Steven May as well, and that was important.

"He's a hyper lad. He's been banging on my door, sending me text messages, but I'm really pleased for him. To be out a long time and come back and get two goals is great for him."

The McDiarmid Park side shrugged off two league defeats in a row, and gained revenge for their 4-0 humbling at Fir Park on New Year's Day, leaving Wright delighted.

He said: "[It was] a terrific performance. It has to be against a very good side.

"We were disappointed with our performance on Saturday, but tonight I think from the first whistle we showed we were out to make up for that. I thought we were excellent and probably could have won by more goals.

"I'm delighted for all the players. Gary Miller has had to be patient and he scores a tremendous goal late on to wrap it up.

"It was a good team performance. We dominated large spells of the game and that was pleasing."