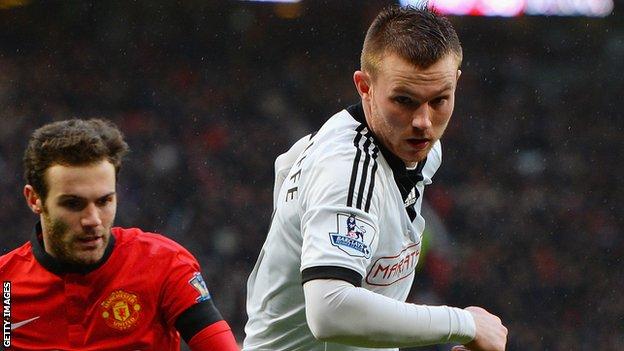 Wigan Athletic have signed Fulham midfielder Ryan Tunnicliffe on loan for the remainder of the season.

Tunnicliffe joined the Cottagers from Manchester United on the final day of the January transfer window.

He featured twice in the Premier League against United and Liverpool, before Rene Meulensteen was replaced by Felix Magath as manager at Craven Cottage.

The 21-year-old will provide cover for Ben Watson, who is set to miss the rest of the campaign with a broken leg.

Tunnicliffe has experience of Championship football with Barnsley and Ipswich, having spent the first half of this season on loan at Portman Road.

"After we lost Ben, I am delighted we have got someone who is so football-educated, having come through the ranks at Manchester United under Sir Alex Ferguson.

"He is a different type of player from Ben but will definitely add a new dimension to us."

Wigan are seventh in the Championship, a point away from a play-off spot, and travel to Nottingham Forest on Saturday.