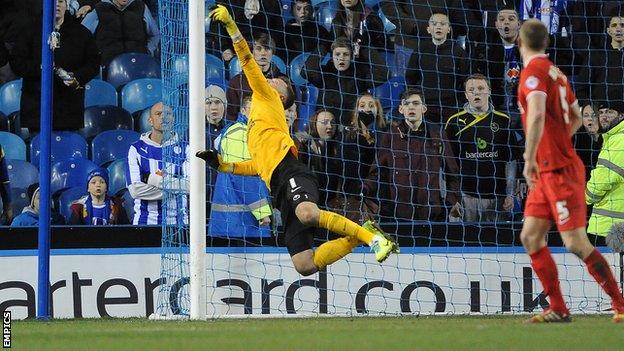 Charlton goalkeeper Ben Hamer believes he earned any luck that was on his side in the Addicks' 2-1 FA Cup fifth-round win at Sheffield Wednesday on Monday.

Back in the side after a six-week absence, Hamer responded with a string of fine saves for Chris Powell's side.

There were also two occasions when he scrambled the ball off the line.

Ben Hamer showed everyone what a fine goalkeeper he is

Hamer told BBC London 94.9: "I've been out for a long time and perhaps I earned some luck because I've worked hard to get back."

Wednesday's late pressure saw substitute Atdhe Nuhiu head against the inside of the post and Hamer react brilliantly to scramble the ball off the line.

He also made an outstanding save in injury time, turning Chris Maguire's deflected shot away from the top corner.

"[Nuhiu's header] wasn't over the line from where I was," Hamer added.

"I'm a yard ahead of play and I threw my hand back and clawed it off the line - and I'm sure replays will confirm that.

"That gave us a real lift," he said. "We came here thinking we can beat anyone if we put our minds to it.

"The fans were magnificent, they kept going all night and we're going to need the fans to drag us out of our predicament in the league as well, because we're down at the bottom and we know we're better than that.

"The Cup is a side interest, in a way. We have to concentrate on Leicester in our next game and hopefully the fans will come in their numbers on Saturday."

Charlton manager Powell paid tribute to the performance of his goalkeeper.

Powell said: "Ben Hamer has been out injured. He's just came back and I thought it was the right time to play him - and he showed everyone what a fine goalkeeper he is.

"It's a good moment in a season that's been troubled and in which we haven't done ourselves justice, but we have in the last two games.

"This year has been a tester and I'm sure people have been wondering what was going on at Charlton, but I get what I can out of my players, they listen to me, they trust me and we got our rewards.

"The players showed their fitness after playing Saturday and travelling up on Sunday. It's a tall order and I thought they were absolutely magnificent."

The quarter-final will be played at United's Bramall Lane ground on Sunday 9th March, with a 12 noon kick-off.