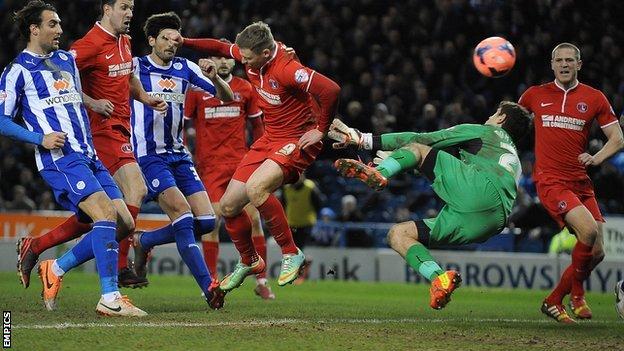 Sheffield Wednesday boss Stuart Gray felt nerves got the better of his side in their FA Cup defeat by Charlton, as they missed out on the chance to play Sheffield United in the quarter-final.

Gray's side fell to a 2-1 home defeat by the struggling Addicks.

The last time Sheffield Wednesday met Sheffield United in the FA Cup was at the semi-final stage in 1993. Goals from Chris Waddle and Mark Bright gave the Owls a 2-1 win.

"Whether it was nerves, only the boys could say but it's the only thing I can think," he told BBC Radio Sheffield.

"They've missed a huge opportunity and the first half was probably the worst 45 minutes since I've been in charge."

Gray added: "I don't mind getting beat but there is a manner in which you do so and that was not it.

"If your game is not happening for you, then it doesn't stop you from running and tackling and putting your head in where it hurts.

"We've let the fans down big time. There was a lot of excitement about with who we would have played and I wanted to go as far as I could in this competition."

Monday's defeat means the Owls have now lost three of their last four matches after going on an 11-match unbeaten run.

Gray, who was appointed as the permanent successor to Dave Jones in January after a successful spell in caretaker charge, believes his side need to follow the example set to them by Charlton.

"We have to get back to the basics," he said.

"We need to run hard, work hard, close teams down and make them make errors. That's what Charlton did to us and we couldn't handle it."